Liverpool spruces up its drab buildings 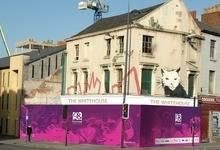 Seven buildings in the centre of Liverpool have been covered in artwork as part an initiative to bring a splash of colour to drab parts of the city as it begins its year as European Capital of Culture.

The initiative, called Look of the City, involves buildings being painted, dressed with wraps or drapes, or hoarded with specially designed artwork.

One of graffiti artist Banksy works is being preserved as part of the programme, which is meant to reflect the city's historical and cultural life. His design of a giant rat's face on side of a former pub that has fallen into disrepair will now remain a permanent feature in Liverpool.

Lines from the Liverpool Saga – the poem started by Roger McGough – feature on hoardings on a former cinema known as the Futurist building on Lime Street.

Kingham House, an office building on Berry Street, is decorated with Chinese artwork following consultation with community leaders in Chinatown.

Other buildings involved in the project include: a row of shops on Williamson Square, the Scandanavian Hotel, a newly built multi-story carpark called Q Park on Liver Street and Kingston House – formerly Figure Factory and Cooper’s Emporium - opposite the city's Three Graces .

The project has been undertaken by Liverpool Culture Company in collaboration with the city council, urban regeneration agency Liverpool Vision and the Northwest Regional Development Agency (NWDA).

Row of shops on Williamson Square

Kingham House, at the junction of Berry and Duke Streets with the former White House pub and the Scandinavian Hotel