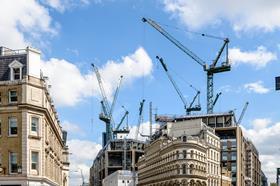 The volume of office construction work in London is facing a slowdown due to political uncertainty, according to the latest half-yearly Deloitte Crane Survey.

But in the six months to March this year, a total of 13.2 million ft² was under construction in the capital, a 12% increase on the previous period and considerably more than the long-term average of 10.5 million ft².

A total of 37 schemes broke ground during the period with King’s Cross representing just over a quarter of the total space being worked on.

Firms in technology, media and telecoms are the biggest users of space followed by financial with the pair accounting for nearly two-thirds of the space being built.

The period featured a 38% uptick in construction starts for commercial schemes in London to 3.5m ft², with the largest contribution coming from a 611,000 ft² development in King’s Cross being built by Kier for US tech giant Facebook.

And of the London areas Deloitte looked at – City, West End, King’s Cross, Docklands, ‘Midtown,’ Southbank and Paddington – only one, Southbank, saw volumes decline, while the City recorded 51% of all office space under construction with financial services the biggest consumer of space in the Square Mile.

Mike Cracknell, a director at Deloitte, said: “Occupiers in the financial services sector have pre-let 2.1m sq ft of space that is still under construction. This is a 50% increase in six months and suggests there is confidence the sector remains committed to London.”

However, the survey also indicates any boom is unlikely to last with the UK’s protracted departure from the EU being blamed.

Deloitte described the level of work in the run-up to the original Brexit date in March “remarkable given the political and economic uncertainty”.

Data from IHS/Markit on construction sentiment suggested commercial volumes had fallen to their lowest level for a year in March, before falling again in April.

And the Deloitte report said: “[These] may indicate that construction starts are likely to fall in the next six months, due to businesses being more reluctant to commit to major spending decisions amid market uncertainties.”

Cracknell added: “Leasing take-up in Q1 2019 has notably reduced, suggesting that occupiers and investors are now delaying their decisions in the run-up to the UK’s EU departure.”

Additionally, the six-month period to March saw a 50% drop in completions, while overall completions in 2019 are only expected to match the 2018 figure.

Construction volumes of commercial schemes are set to drop when some big schemes, including 22 Bishopsgate, being built by Multiplex, and the 750,000 ft² Bank Street scheme in Canary Wharf, finish later this year.

Deloitte also said pre-letting is “reaching new heights in London” for a combination of client and supplier-side reasons.

While workspace is becoming more important in attracting talent, and occupants are keen to influence design and layout, an increase in pre-lets is also due to a “declining appetite for speculation by developers”.