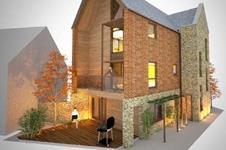 Forward housing sales at Persimmon have fallen 13% as a result of a sharp fall in demand since the summer.

In a trading statement the housebuilder reported 2008 forward sales of £603m compared to £701m at the same point last year.

Persimmon said that lower market activity in the Autumn period meant completions in 2007 had fallen 5% to 15905. It said lower consumer confidence and the higher credit costs were to blame.

Despite the fall in sales Persimmon has predicted a rise in pre-tax profit for 2007 in line with the mid-range of analyst forecasts.

The housebuilder said the use of incentives had helped prop up sales prices over 2007, with the average selling price rising 3% to £189,558.

Its operating margins also improved as a result of tight cost control and further synergy savings following the acquisition of Westbury.

Persimmon said that it expected an uplift in sales over the next period due to lower interest rates and the spring selling period.