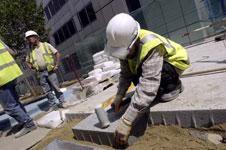 Sales were down 16% last year at landscaping products supplier Marshalls.

Sales to the public sector and commercial market, which represent 58% of Marshalls' sales, were down more heavily, by 18% for the year.

Sales to the domestic market were down 13%, meanwhile.

Marshalls said in a statement today : “The group remains cautious about the short term outlook, especially given the latest industry forecasts for 2010, which continue to predict mid-single digit reductions in volume. “

Marshalls said in June it had closed factories and reduced working shifts in order to cut costs.

It also raided £4m through a right issue earlier in the year.

It said today: “Cash management has been a priority during 2009 and reductions in stock and capital expenditure have ensured that net debt at 31 December 2009 is slightly better than plan at approximately £69m.”