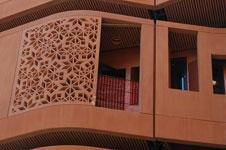 UAE developer Aldar has agreed a deal with with Masdar to take over the developer’s role on a delayed Foster + Partners scheme within the $22bn Abu Dhabi project to build the world’s most sustainable city. The news comes as Masdar unveiled a review of its plans, which will result in fewer buildings built over longer periods, but which will be more efficient.

Aldar will take over the development of the Masdar Institute of Science & Technology (MIST), a cutting edge research facility being developed in cooperation with the world-renowned Massachusetts Institute of Technology (MIT) and designed by Foster + Partners, which will develop green technologies.

It is understood that Aldar, which has had no involvement in Masdar until now, is being brought in based on its reputation for fast-tracking projects. These include the Yas marina, hotel and Formula One racetrack, which was built in 18 months, with Carillion’s UAE joint venture Al-Futtaim Carillion playing a key role.

The contractor consortium currently working on phase one of MIST is Hong Kong Al-Ahmadiah/Hip Hing consortium. This was to be completed at the end of 2009 but is still under way, with the opening date pushed back to September 2010.

Masdar is close to awarding the construction contract for phase two of the scheme, on which US consultant Parsons Brinckerhoff is the project manager.