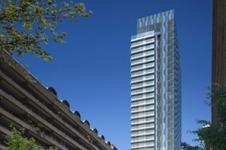 Sir Robert McAlpine has emerged as a rival bidder to Mace and Brookfield on the Heron scheme at Barbican in London, amid increasing competition over cost

A contractor is set to be appointed to the scheme, being developed by Heron Properties, “within six weeks”, according to sources close to the situation.

The 35-storey tower, formally known as Milton Court, has been the subject of fierce competition between bidders. Brookfield and Mace were thought to be front runners for the contract; however, it is understood that Sir Robert McAlpine has entered a bid significantly lower thanits rivals.

The contract was originally thought to be worth about £190m, but it is understood that current bids start at about £55m below that price.

Heron is also understood to have asked Skanska to price the contract, amid pressure to drive down costs. The contractor’s bid came in higher than that of its rivals, however, one source described the company as “waiting in the wings” should Heron fail to secure the deal it wants.

The scheme contains almost 300 residential apartments above a 625-seat concert hall for the Guildhall School of Music and Drama. It was put on hold in summer 2008 amid worsening market conditions, and its revival is the latest sign of life in the London development market.

The tower, designed by David Walker Architects, will be the largest residential scheme to be built in the City since the Barbican Estate was completed in 1976. The tower has been scaled back since its original design, with the height reduced by about 28m to 112m amid concerns about views from the South Bank.

The restarting of the scheme follows a similar move by Land Securities, which has recently appointed Sir Robert McAlpine, Mace and Wates to three major developments in London.