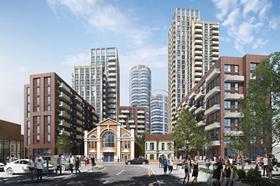 McLaren has been chosen to carry out the second phase of a residential job that is part of the local council’s plans to transform the middle of Barking in east London.

Be First, Barking and Dagenham council’s development company, has asked the contractor to build 169 affordable and shared ownership homes on a former local authority car park at Linton Road.

The council and McLaren, which is tipped to beat Sir Robert McAlpine and land the deal to build the Sphere music venue in Stratford, did not disclose the value of the scheme, which has been designed by Carey Jones Chapman Tolcher.

The Linton Road development is one half of a two-part scheme which includes a separate contract to demolish Crown House, a 1960s office block, and replace it with a 29-storey apartment block. The Crown House contract has already been awarded to McLaren.

The planning application for both parts of the development was approved last month and is currently being considered by London mayor Sadiq Khan.

Work is set to begin early in the new year, with an expected completion date of 2022.

McLaren was among the seven companies recently appointed to Be First’s £1bn construction framework with other firms on the list including Wates and Willmott Dixon.