Hoskins Architects’ third attempt to build a luxury hotel around one of Edinburgh’s most significant landmarks has failed after the Scottish government rejected it on appeal.

The high-profile case has seen two of Scotland’s leading practices pitted against each other and yesterday’s decision explicitly reopens the possibility of a speculative, rival – but consented – scheme by Richard Murphy going ahead. 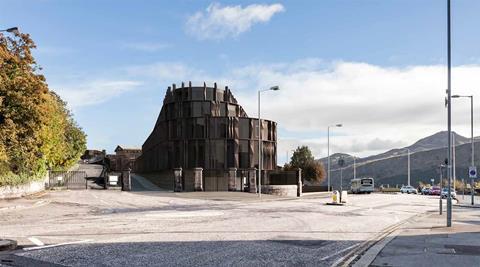 The category A-listed school, a Greek revival building designed by Thomas Hamilton in the 1820s, is part of Edinburgh’s World Heritage Site and can be seen from across the city.

Its owner, Edinburgh council which currently uses it as offices, offered a 125-year lease to Duddingston House Properties which wanted to turn it into a hotel.

Hoskins was part of the competition-winning team but its first proposal, in 2010 was likened by protestors to Godzilla straddling Calton Hill, a volcanic remnant whose collection of historic monuments is largely responsible for the city’s nickname, the Athens of the North.

Hoskins submitted a revised scheme for 147 bedrooms and other facilities covering 18,450sq m in 2015. The council rejected it by one vote. Then in 2017, a year after the sudden death of founder Gareth Hoskins at 48, it submitted a further revised scheme which reduced the prominence of the most controversial elements, two wings which would have extended either side of the main school building.

It was again rejected by the council in a decision backed first by the planning inspector – known as a reporter in Scotland – and now by the Scottish government.

Its ruling, published on Tuesday, said “the prominence and dominance of the building in certain views would be spoiled by the overwhelming scale of the extensions proposed”.

The client now has six weeks to lodge a further appeal.

Hoskins issued a statement saying: ”We are disappointed with the appeal decisions. Having carefully developed proposals in response to the site, with the client and team in consultation with a wide range of stakeholders over a number of years, we firmly believed that both applications achieved the required balance between conservation and development.”

Its planning application pointed out that since the Royal High School moved out in 1968, a “suitable, long-term use has not been found for the building and all the alternatives contemplated over the years, to a greater or lesser extent, came up against the same set of obstacles” which include the cost of restoring a grade A listed building.

It also pointed out that the council’s original aspiration set out in 2009 was for a “sustainable and robust commercial business solution for the buildings”.

Opponents of the hotel marshalled themselves and appointed Richard Murphy to draw up a rival scheme to move Edinburgh’s St Mary’s Music School into the building.

This won planning and listed building consent but was never built because the site was controlled by Hoskins’ client.

In their report, ministers conceded that the Hoskins scheme would do a superior job of conserving the old Royal High School’s historic fabric and in particular its interiors. But they ruled the damage wrought by the two new wings, even in their scaled-back form, outweighed that benefit.

They gave a strong signal that they would welcome the revival of Richard Murphy’s scheme for the Royal High School Preservation Trust (RHSPT).

Its planning consent is still live though the listed building consent has expired.

In an unprecedented decision notice, the ministers, remarking that the scheme would probably be approved again, wrote: “There is no reason why the RHSPT scheme would not be a viable and achievable alternative to the appeal proposals.” It should therefore be “considered an option”, they said.