Multiplex is being tipped to land the next phase of the Chelsea Barracks development – a year after it first won the job.

Building understands the firm has beaten remaining bidder Mace, which has been carrying out work on the first three phases of the upmarket residential scheme, to the shell and core deal which has a pricetag of between £250m and £300m. The original longlist of firms for the retendered work included Skanska, Lendlease and Kier.

Developer Qatari Diar pulled Multiplex from the fourth phase of the redevelopment (pictured) just days before it was due to start work back in February last year.

Keltbray had been due to carry out the concrete frame and basement work – which was worth around £60m – but was also stood down. It is understood the firm is now back on the job with a formal announcement on both appointments due shortly.

The fourth phase of the scheme, which runs across three buildings, has been designed by Eric Parry Architects which last year applied to increase the number of homes at the scheme to 97. To achieve this, a number of large flats will make way for smaller one and two-bed units. 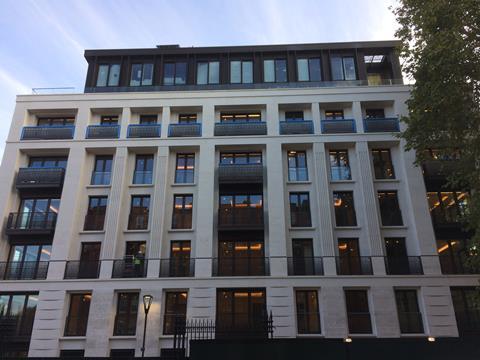 Multiplex’s win is a tonic for the 22 Bishopsgate builder after it, along with Sir Robert McAlpine, was earlier this month beaten by Mace to Sellar’s Paddington Square scheme – the £350m building in west London designed by Reno Piano better known as the Cube.

And just before Christmas Multiplex and McAlpine were pipped by Skanksa to the £150m scheme at 20 Ropemaker in the City of London which has been designed by Make Architects.