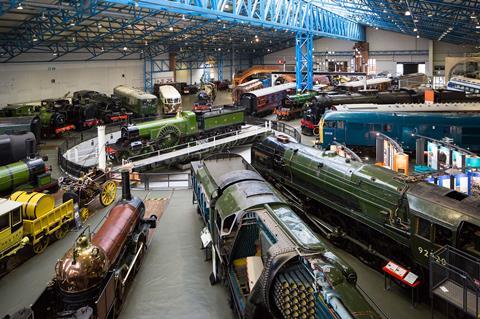 The Great Hall at the National Railway Museum in York

The Science Museum is looking for an architect for a £12m project at the National Railway Museum in York.

The institution has issued a tender for a full-service exhibition design team to deliver a complete redisplay and reinterpretation of the museum’s Great Hall.

The 8,300sq m gallery houses the museum’s star exhibits, including the record-breaking steam engine Mallard, a Japanese bullet train and a replica of Stephenson’s Rocket.

Built in 1877, it was engine shed number four where steam locomotives were prepared for the main line until 1968 when it became a store for redundant steam trains when diesel and electric were introduced.

The space has remained largely unchanged since the museum opened in 1975, aside from a new roof in 1990.

An important surviving feature is the operational turntable and roundhouse layout which forms the centrepiece of the space and will be incorporated into the new design.

The redevelopment project will allow more exhibits to be displayed, will involve a strong emphasis on inspiring a new generation of engineers – and will include the creation of a shop.

Museum director Judith McNicol said: “We are seeking ambitious and capable designers that can combine a sensitive approach to displaying our much-loved railway history with bold and imaginative ideas that can help redefine what a 21st-century museum should look like.”

The museum wants work completed by 2021 under the first phase of a wider masterplan which is set to be completed in 2025.

Work is scheduled to start this summer.