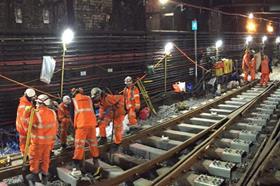 Network Rail is seeking contractors for a £5bn, 10-year framework to carry out track works across the UK.

Successful firms will be responsible for rail infrastructure over the next decade, covering National Rail’s control period six (2019-2024) and control period seven (2024-2029).

One of the requirements for tendering is that design suppliers and installation form joint ventures before expressing interest.

The rail authority intends to appoint one consortium  to each lot, while each JV cannot win work on more than regional lot.

A shortlist of no more than four bidders is expected to be made for each lot.

Interested groups have until 2 July to express their interest in the framework, with shortlisted consortia due to be invited to tender on 15 August.

Work on the framework is expected to start in July or August next year.

The order came as part of its initial view of Network Rail’s plans to spend more than £34bn between 2019 and 2024 – the programme known as Control Period 6.

In its assessment of the five year plan, the Office of Road and Rail (ORR) said it had “identified greater scope for Network Rail to do more than it proposed to boost reliability and safety, for the benefit of both passengers and freight customers”.

ORR has said that Network Rail should amend its plans to deliver around £1bn of additional renewals work to replace worn out assets.

This will bring the total renewals budget to £18bn across the country.