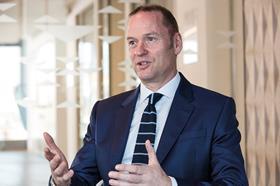 Tim Roberts, a former board member at the Broadgate developer, takes over from John Sutcliffe next January before leaving Boot’s board next May following the firm’s AGM.

Roberts (pictured), who is originally from Sheffield, has spent 15 years at British Land and worked on developing its Rogers Stirk Harbour + Partners-designed Leadenhall building in the City along with the 5 Broadgate scheme, which was designed by Make and built by Mace.