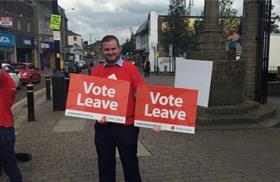 The government has appointed Andrew Stephenson as the new construction minister.

He replaces Richard Harrington who quit at the end of last month in protest at the government’s handling of Brexit.

Harrington said a no deal Brexit would have “widespread and long-standing implications for everyone. The economy may take five to 10 years to adjust to the new reality.”

Stephenson, who was previously a government whip and the role as minister in the Department for Business, Energy and Industrial Strategy, said he was “looking forward to the challenge”.

The MP for Pendle (pictured) campaigned for Leave in the 2016 EU referendum.