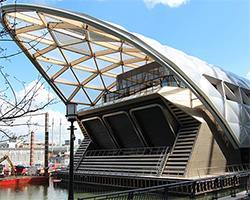 Clients of former Lakesmere company McMullen Facades are set to meet with the firm’s new owners JRL in order to develop a plan of action for current jobs.

JRL Group director Kevin Keegan said there were plans to complete the Northern Irish company’s jobs that are already underway.

“We are hoping to complete as many existing jobs as possible,” Keegan said. “We are currently trying to go out and meet with as many of the clients as we can [this] week.”

Keegan, who would not comment how much it had paid for the business, said its plan was to get McMullen operating as usual as fast as possible.

“The aim is for everyone to keep their jobs and get them back to doing what they do as fast as possible. We will be keeping the same managerial team in place as we have every confidence in them,” Keegan said.

The company’s sites at Moira and Portadown in Northern Ireland will both continue operating.

But legal issues surround the company’s name, with Keegan saying JRL is currently getting advice on whether it can stick with the McMullen Facades name.

Explaining the decision to make a move for McMullen, Keegan said it was a chance for JRL to bring in a key trade under its own management umbrella.

He added: “It presented a rare opportunity to secure a business of this calibre. We think it is a world-class business that fits into our business model of keeping key elements in-house. Moving forward our goal is to grow the McMullen business. It is a world-class business that has the faculty for greater output. More broadly we believe the acquisition will open more opportunities for the wider JRL Group, particularly in the commercial sector.”

McMullen’s most recent financial results for the year ended January 2016 saw it post turnover of £37.3m, compared to just under £26m for the year before.

In the past, it has worked on projects including the London 2012 media centre at the Queen Elizabeth Olympic Park and The Obel – the tallest building in Belfast. More recent jobs include the Foster & Partners-designed Crossrail station at Canary Wharf (pictured) along with a residential tower it is currently working on at Lendlease’s Elephant & Castle redevelopment in south London.

At the time joint administrator Peter Allen of Deloitte, who was also appointed as an administrator of Lakemere after the business collapsed on 3 November, said the firm had simply been caught up in the Lakesmere collapse.