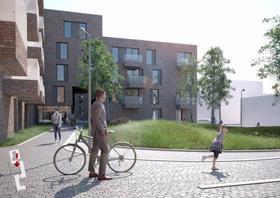 One Manchester has announced plans to build 170 homes for market rent in the city’s Hulme district.

The new project, known as ‘Hulme Living’ will see a mixture of two-bed apartments and three-bed townhouses built across two sites at Leaf Street and Royce Road.

The development is the first since the formation of One Manchester year from the merger of Eastlands Homes and City South Manchester Housing Trust earlier this year.

The homes on Royce Road will consist of 66 two-bedroom apartments designed by OMI architects and will be situated on a corner site where Royce Road meets Chorlton Road.

The development on Leaf Street will have 100 new homes adjacent to Princess Parkway designed by Mecanoo and will offer a mixture of two-bedroom apartments and three-bedroom townhouses.

All revenues earned from the homes will be reinvested back into community development programmes. Dave Power, chief executive of One Manchester, said: “This is a very exciting project to get started and it’s a small step in the right direction as Greater Manchester desperately needs to be building at least 10,000 new homes per year in order to play its part in tackling the national housing crisis.

“I’m pleased to say that the initiative also extends beyond the practicalities of a typical housebuilding scheme; it is a tremendous opportunity to help transform people’s lives and boost the residential community in Hulme and surrounding areas.

“I would urge the residents of Hulme to come along to one of our upcoming consultation events. They’ll be able to find out more about the project and share their views, which will be extremely important in moving this forward.”