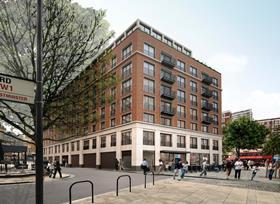 Osborne has been appointed to carry out a £40m reconstruction of Regent House in the Marylebone area of central London.

Demolition contractor Deconstruct has already torn down the 1960s building, with Osborne set to start construction next month.

The new building will feature office space over six floors, as well as 24 apartments and four retail units on the ground floor.

The scheme, designed by Stiff + Trevillion Architects, is due for completion in 2020.

Osborne is joined on the job by engineers ATK II and Hoare Lea and project manager Cast.

Client on the scheme is Native Land, developer of Neo Bankside – whose residents lost a court case against the Tate after it built a viewing platform next door to the Tate Modern art gallery on the banks of the river Thames.

Last month the contractor was appointed to refurbish a 1920s building on the Strand, also in central London.