Despite output shrinking, the construction industry has seen a boom in new orders, according to Office for National Statistics (ONS) figures.

Output declined for the sixth consecutive three-month on three-month period, falling by 1.4% in October.

The fall was caused by dips in both repair and maintenance, and all new work, which decreased by 3% and 0.6% respectively.

Construction output also contracted month-on-month in October 2017, decreasing 1.7%, in part due to a 1.5% fall in all new work.

But it wasn’t all doom and gloom, with new orders achieving record growth in the third quarter of this year, growing by 37.4% compared with the previous quarter.

This was largely driven by growth in the infrastructure sector, caused by the awarding of several high-value new orders relating to HS2.

Housing new orders also grew in the same quarter, increasing by 9.5%, folllowing a 4.2% fall in the previous quarter.

Will Waller, market intelligence lead at Arcadis was bouyed by the positive trend in new orders.

He said: “The landing of a chunk of HS2 makes this the best quarter ever for infrastructure. Behind this, the other sector figures are really encouraging, showing stability or growth across the board. With these positive new order figures and movement in the Brexit negotiations, which raise the probability of a ‘soft Brexit’, UK construction has just been given an early Christmas present.” 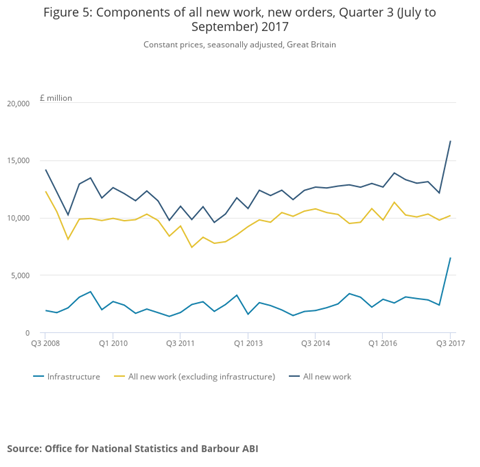