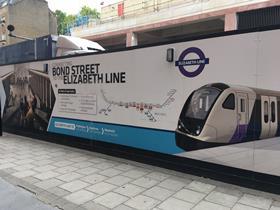 Crossrail has said that more than 100 milestones still have to be met before the railway can begin trial running trains along the central section of the route.

The news emerged in the first of a series of promised updates Crossrail, which a year ago next week announced it would miss its original December 2018 opening date, said it was issuing as part of an initiative to “being fully open and transparent as it works through the critical final stages of the project”.

Last August’s announcement caught many by surprise and led to London mayor Sadiq Khan raising concerns with government spending watchdog the National Audit Office “over transparency on the project and the effectiveness of Crossrail’s governance”.

The trial running phase is due to start in the first three months of next year giving Crossrail between six and nine months of testing time if the line is due to hit the earliest date, October 2020, in its revised opening window timetable.

He added that it also needed to finish installing and testing station systems and complete installing equipment in the tunnels and test the communications system.

Crossrail said train manufacturer Bombardier and German firm Siemens, responsible for the communications and control systems on the central section of the line, have drafted in staff from their operations around the globe to complete testing of the technical railway systems – so-called dynamic testing – ahead of trial running of trains.

In its update, Crossrail said: “A list of 120 key programme milestones have been identified to enable the programme to progress to the Trial Operations phase and each must be successfully delivered to enable the Elizabeth line to open.”

It said it was carrying out key tests at a Crossrail testing facility in Chippenham, Wiltshire, as well as Bombardier’s factory in Derby.

Wild said: “Fit-out is nearing completion at many stations and testing of the train and signalling system is underway but there is still a huge amount to do before the central section can open.

“Crossrail is now in its critical and most challenging final phase due to the significant integration and testing work that remains to be completed.”

The update said the main areas of programme risk and uncertainty were contractor productivity, software testing for the trains and signalling systems and systems integration.

Crossrail said it was working closely with its Tier One contractors to demobilise the teams working on stations so that it can move ahead with integrating the nine new stations on the central section with the rest of the railway.

The update also said that the forecast opening window between next October and March 2021 for the central section of the line, excluding Bond Street, remains unchanged.

Crossrail said it would be able to provide increasing certainty about when the Elizabeth line will open once it starts to fully test the operational railway and integrate the train and signalling software.