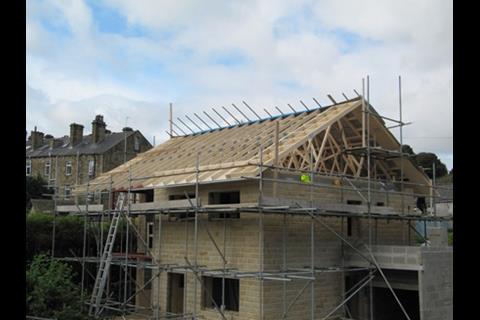 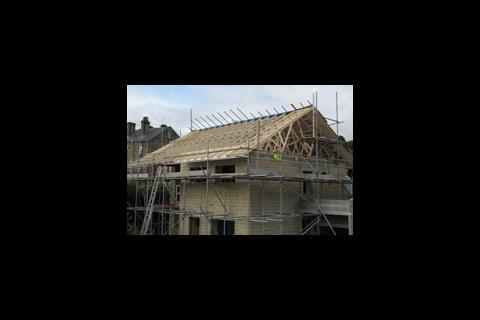 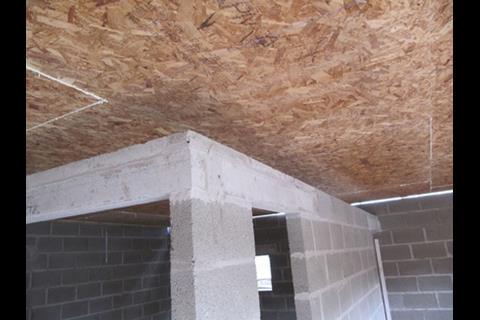 The roof trusses are now up, so it's time to make the junctions between the walls and the roof airtight

How do we get future buildings to perform in the way that the Denby Dale Passivhaus is going to? I’ve been in building since I was 16. I trained as a quantity surveyor and worked on both sides of the professional fence before “taking up the tools” in my late 20s, all of which has allowed me to see the industry from several angles.

In this country we have lost a lot of the apprenticeship training methods and traditional managerial responsibilities for quality, going over to a mainly subcontractor culture. I fear we’ve lost the skills necessary for the careful construction methods needed to get the high levels of airtightness and the minimising of thermal bridging essential for low carbon and Passivhaus buildings. To achieve that level of attention to detail requires the design team, on-site workforce and client to be educated in what’s needed.

For a building to meet Passivhaus criteria you have to create a team ethos where everybody understands their part in the process, where there is continuity of personnel, and ideally includes subsequent monitoring of the buildings energy use. As we know, the typical scenario in this country is for the designer to liaise with the client to create a design for a proposed project. Typically this information will then go out to several contractors, in the form of drawings, specification, and a bill of quantities. The contactors will then estimate how much they want out of the job, or even what “holes” he can find in the contract documentation to be able to claim extra income later. This same ethos will carry on down the chain through to the subcontractors, leading to an attitude of “what can we get away with”.

A typical example of the problems that can occur on site would be a subcontracted plumber coming along and puncturing the vapour and airtightness barrier which is then covered up by the subcontracted plasterer. Individual subcontracting teams for different trades do not naturally “look out for each other” leading to breakdown of the building fabric and energy use performance. In other words, all parties try to “pass the buck”.

I would not pretend to know all the answers to the contradictions raised by getting a building to perform well and having to have the checks and balances of competitive tendering. I do know that trust, honesty, transparency and commitment between all parties at all levels and stages of the project will go a long way to answering these questions. Good robust and buildable detailing is essential. An early inclusion of builder and any subcontractors in the design stages for the two way exchange of knowledge is preferable. Partnering contractual arrangements where contractors are chosen for their suitability at an earlier stage of the design process, often used for large complex projects, could be a model for us.

Contrary to traditional management theories, employed people do not always put money as their first priority. The vast majority of people in the construction industry want to do a good job, and be praised for doing it. If the whole team is on board you have far better chance of success.

The roof trusses are now in place, so we are concentrating on the important airtightness detailing at the roof and wall junction. Our airtightness barrier on the block walls will be traditional two coat wet plaster. As concrete blockwork is not airtight, dot and dab plasterboard with plaster skim would not perform unless the blocks have a sand and cement parging coat (which rather defeats the object).

For the first floor ceiling we have used 18mm OSB board (18mm is deemed airtight) screwed up into the ceiling binders of the timber trusses which are at 600mm centres. We also wanted to use its structural properties, as 500mm thick mineral wool in the horizontal ceiling would tend to make plasterboard on its own sag. The butted joints of the OSB are taped with specially designed Pro Clima airtightness tapes derived from the automotive industry. Importantly these tapes, along with associated membranes and mastics, have to perform for the life time of the building.

To help achieve the high airtightness levels required, the Denby Dale Passivhaus has been designed to need minimal puncturing of the OSB barrier. Electric cabling will be in the 25mm void created by battening and the plasterboard finish, with the timber batons screwed up into the OSB board. Any fixings through an airtightness membrane (eg a screw going through the OSB board) are deemed to have closed any rupture, provided it is done tight. The clamping of the baton tightly with the screw is deemed to have closed off any interruption of the airtightness barrier.

In addition there will be no trap access hatch as we are putting an external access in the gable end, and all internal block partitions are completed up to the OSB and not all the way up to the trusses.

The junction between the wall and the OSB board is taken care of with another type of Pro Clima membrane taped to the OSB and masticed to a pre parged strip at the top of the blockwork (shown in green on the diagram). Metal lathing gives a key for wall plaster.

Measures to obtain airtightness at wall and roof junction