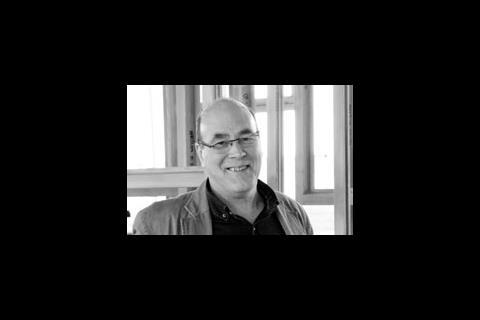 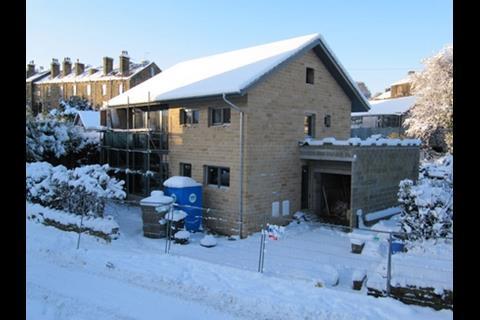 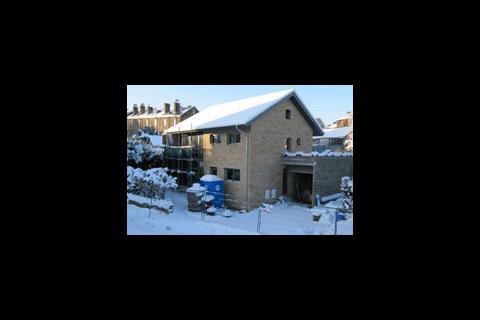 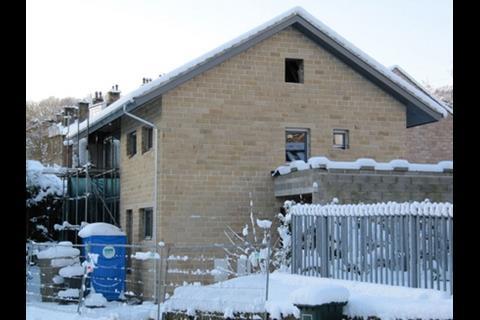 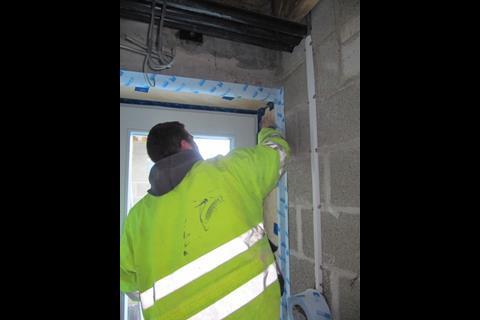 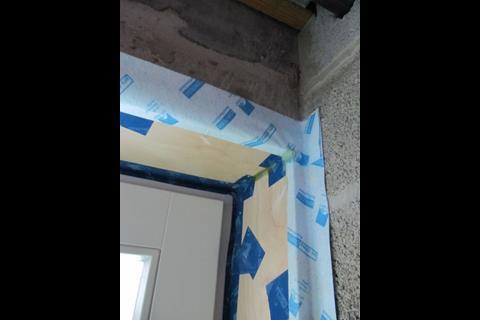 Despite the arctic conditions, preparations proceed apace for the approaching airtightness test – including a spot of tape origami

At last the windows are in place and, despite the heavy snow here in Yorkshire, work is carrying on apace in anticipation of next week's initial airtightness test. This week's blog will look at some of the airtightness detailing we are undertaking to ensure that we meet the stringent Passivhaus requirements.

As mentioned in previous blogs (parts three, nine and 11) airtightness is crucial to the effectiveness of a Passivhaus structure. The interchanges between different components of the building, such as the floor-to-wall and wall-to-roof junctions, are often the areas where air leakage can occur, as movement between the different materials can lead to cracking and air loss.

With the recent fitting of the windows at Denby Dale, the building team has had to pay close attention to the junctions between windows, window surrounds and the internal plastered walls. Following the actual window fitting, a small team has been tasked with patiently applying the airtightness tapes and membranes around each window aperture, often spending up to half an hour around each window.

Junction between window and plywood boxes

The joint between a window and wall (or in the case of the Denby Dale house, plywood box) is obviously potentially a very weak spot. At Denby Dale, to seal the junction between the window frame and the plywood box, we have used Pro Clima Tescon Profile airtightness tape, designed to last the lifetime of the building. Developed in Europe specifically for ensuring the airtightness of buildings, the tapes have a very powerful and durable adhesive originally used in the aerospace industry. They have been in use in Germany for over 20 years. The tape also has some stretchiness in it, which allows for some imperfections and movement between the materials.

On a standard build, silicones might be used to seal this junction, but these would only work for a while and would eventually break down over time with the expansion and contraction of materials, whereas an airtightness tape such as Tescon will accommodate that movement. To seal corners more effectively and easily, Tescon Profile has been developed with three tear-off strips.

First we pull off the smaller, 10mm strip, which goes against the face of the window frame (which will then be covered by plasterboard and skim on the reveals and head, and by a timber window board below). It needs to be pushed into the corner, using a special applicator. Then we pull off the second and third strips, which are secured onto (in this case) the plywood box.

Corners around the window frame are a lot trickier – you need to do a bit of origami, by making a nick in a short length of tape and folding it over itself so it forms a 3D tape corner, which seals the join effectively. This detail is done on every change of direction.

Junction between plywood box and blockwork/plaster

To seal the plywood box to the blockwork and wet plaster, we have used Pro Clima's Contega airtightness tape/membrane, which is one-third a strong adhesive tape strip and two-thirds airtight fleece membrane. The sticky tape element is attached to the edge of the plywood box. The fleece element of Contega membrane is then plastered into the blockwork, allowing us to seal the plywood box with the plaster and blockwork. Contega is airtight and pliable, allowing movement between timber, plasterwork and blockwork while also maintaining an airtight seal, offering a great solution to a very common cause of draughts in buildings.

For service pipes coming through the floor slab, we are using rubber grommets that are then sealed with Pro Clima Orcon adhesive to the concrete floor, just to be extra careful. Pro Clima also smake special grommets for electric cables, allowing you to poke various holes through as needed.

We hope that, with this amount of attention, we are going to get the magic airtightness figure of 0.6 of an airchange per hour at air pressure difference of 50 Pascals, which represents a wind speed of 20mph around the building.

Professor Malcolm Bell's team at the Centre for the Built Environment at Leeds Metropolitan University, who are following the project, are kindly going to do an initial blower door test next Thursday to show us where we've got weak spots within the building. It is vitally important to do airtightness tests at the earliest possible stage.

It is more straightforward in a timber-framed house, where you can do the test before the plastering, but in the Denby Dale house we're using the plaster as our airtightness barrier so we've had to go a stage further before we can have the blower door test. We will be testing for airtightness before we put in kitchens, bathrooms, and second-fix joinery such as skirting boards, so that at least we can access all the key airtightness problem areas and test them with smoke matches in case we're not reaching the Passivhaus requirements.

Our final UKAS-accredited airtightness test will be undertaken by Buildcheck (www.buildcheck.co.uk), and will be used for the certification of the building (and for Building Control). This will be undertaken in a few weeks' time when we have done most of the second fix.

I'm hoping that in this initial blower door test we'll get somewhere near the magic Passivhaus figure of 0.6 ac/h @ 50Pa. (This is of course expressed in the German way, as a volumetric measure. In the UK we normally express it as air permeability, in cubic metres of air moving through a square metre of the building fabric at 50Pa pressure differential (m3/m2h @ 50Pa).

To achieve 0.6 ac/h @ 50Pa to satisfy the Passivhaus standard, this will mean that the Denby Dale house will have an air permeability of 0.65 m3/m2.h @ 50 Pa, which will be around 15 times more airtight than current Building Regulations. As far as we know, the Denby Dale house is the first Passivhaus to be built with cavity wall construction. It's been done with solid wall, it's been done with timber frame, but it's never been done with cavity wall… so we're a bit nervous, though fairly confident as well. I hope by the next blog, I'll be a lot happier!