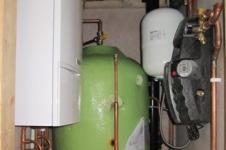 We are currently installing the heating system at Denby Dale. With a space heating requirement of less than 15kWh/m2/annum, the house will require minimal heating (at least 90% less than an average UK house). In a Passivhaus most of the heat created by solar gain, occupants' cooking, showering and the like is retained within the building. But on very cold days – or if the house has been unoccupied for a while – a Passivhaus still needs a top-up.

The heating need for a Passivhaus is so low that it can be a problem to find an appropriate heat source that can work at such a low demand. The peak heating load for the Denby Dale house is calculated in PHPP as being 10W/m2 when the outside temperature is -10ºC. The house has a total floor area of 118m2 so the total heat demand will be 1.18kW. A standard one-bar electric fire throws out about 1kW. So the total space heating need of the Denby Dale Passivhaus is the equivalent of one bar of an electric fire. This actually creates a lot of problems for us in terms of using off-the-shelf equipment to heat the building. An average house of the same size might typically use a 15kW boiler – a much greater capacity than what is needed at Denby Dale.

Following initial discussions with the Tunstalls, it was originally agreed that we would use a conventional condensing gas combination boiler at Denby Dale. The reason is that they are cheap, readily available and easy to maintain, with minimal maintenance costs.

Having natural gas available, we decided that it was better to stay on-grid rather than go off-grid for our heating needs. If you build to the Passivhaus standard you don't need much energy for space heating, so the use of natural gas becomes minimal. If everybody lived in a low-energy Passivhaus, reserves of natural gas would last a lot longer and also we wouldn't be putting very much carbon into the atmosphere. (See Chris Herring's comments on the last blog for more on this debate.)

If you were building a Passivhaus in a more remote location, then using off-mains renewables for heating, such as biomass, would obviously come onto the horizon. When you've got natural gas in the street outside, it makes sense to use it and invest in the building fabric, rather than to go mad with renewables.

As should be obvious by now, the Passivhaus approach, like Green Building Store's ethos, is very much about concentrating on reducing energy use in the fabric of a building first before applying bolt-on renewable technologies, which often have dubious effectiveness and cost benefit.

With a tight build cost budget of £140,000, we decided to put our resources into the fabric of the building, rather than build something bristling with expensive renewables such as solar panels and wind turbines. I would much rather put my – and my customers' – resources into the fabric of the house itself, as that is going to be there for the lifetime of the building. The heating method can always be changed later, but you can't change the way a building has been constructed.

However, since we started building, our local council, Kirklees, has started an innovative scheme called Re-Charge, which supports people wanting to install renewables in their homes. ReCharge offers grants of up to £10,000, which are available in the form of a second charge on property. This is then repaid at the time of sale.

Kate and Geoff Tunstall have taken up Kirklees' offer and will be going for solar thermal panels on the roof. Once everything has been done to the building fabric that can be done, solar thermal is always the renewables technology that we would recommend first. When I was in Germany last year at the Passivhaus conference, I went on a tour of four Passivhauses, which all had solar thermal panels – but no other renewables (and they all relied on natural gas for heating).

So the Denby Dale Passivhaus will have solar thermal built into the roof (we had already laid the roof tiles, so we'll have to take some of them off), which will be connected to the relatively sophisticated hot water cylinder. This will mean that Geoff and Kate now have an extra heat source for their hot water, which should help keep their gas bills to an absolute minimum. We will, of course, be monitoring this, post-occupancy, along with our friends at Leeds Met University.

One of the knock-on effects of having solar thermal has been that we have had to swap the originally planned combination boiler for a system boiler. Although we have a low space heating need and now solar thermal, we still need an insurance of a 3kW heating capacity for hot water - for baths, showers and washing up, for when the sun cannot produce. At Denby Dale we have decided to go for a system boiler from Vaillant: the Eco TEC 612, which gives the ability to modulate the heat output down to 4.9kW, the lowest we could find.

The boiler and hot water tank

A system boiler, also known as a sealed system boiler, has an integral expansion vessel so we don't have to interrupt the airtightness barrier with an attic space header tank. The space heating system will now consist of:

Those four heating items added together will deliver more than the 1.18kW of space heating needed, but because present gas boilers aren't made to run at such a low output we need to have an adequate volume of water within the system, so we've had to make capacity larger than is actually needed. I believe that manufacturers are now looking at making boilers down to 3kW as standard for this sort of situation, but we haven't got there yet.

The unusual aspect of the heating design is the duct heater (or heater battery as it is sometimes called). This is a classic, although not mandatory, element of Passivhaus design, avoiding the cost of installing radiators. An advantage is a quick response time compared with standard radiators, which take a relatively long time to cool down thus potentially causing overheating.

Using a heater battery in the ventilation ducting means that we have to ensure that the temperature does not rise above 58ºC in the duct. If it does, then the dust can start to carbonise, giving a typical “hot smell”. This is one of the defining points of a Passivhaus - that it can be heated through a heater battery without needing to increase the ventilation rate and without causing carbonisation of the dust. What this means for us is that we have to ensure that the water reaching the heater battery does not exceed 60ºC. The advantage of course is that we will operate the boiler at this temperature for heating and hot water, ensuring that it is in condensing mode most of the time.

Wet towels and other conundrums

In response to the question from Hugh Broadbent, I would like to address the problem of how one dries wet towels and the like in a Passivhaus.

Passivhaus buildings create a very even temperature and are also consistently well ventilated. Contrast this with the average UK house, in which the ventilation is pretty hit and miss and the lowest levels of ventilation tend to be on the coldest days, when people are reluctant to open windows or even trickle vents. A Passivhaus ventilation system is bringing in adequate levels of cold air and warming it up through the heat exchanger. Because cold air can carry very little moisture and warmer air can carry more, this means that the warmed air will tend to have a rather low humidity, and that if anything a Passivhaus will tend to be dry. This is certainly the experience in Germany, although they tend to have colder, drier conditions there anyway, so we shall wait to see what the result will be in the warmer, damper Yorkshire climate. What all this might mean is that Geoff and Kate will need plenty of plants to humidify the air and of course that their wet towels won't be much of a problem.

Ironically, as the two towel rails at Denby Dale are connected to the heating system, they will not be functioning very much. Therefore we're proposing to use a dual-purpose towel rail that is both connected to the boiler central heating and also has an electric element in - because we wanted to give the Tunstalls the option of a heating source for drying towels if needed. This is something of a pragmatic decision, as electricity is obviously still a dirty form of energy, but we believe that the overall warmth and dryness of the building will mean that it is rarely needed. On the Continent, Passivhauses often get around this problem of drying clothes by having covered drying spaces underneath the roof eaves (to the north side of the building).

We are now on the downhill stretch. We know that we've got the airtightness, and we're hoping that we are going to improve on the interim results we've had. We're doing all the secondary fixings now: bathroom, kitchen, flooring (bamboo and slate), skirtings, architrave, internal doors. This should all be finished in the next couple of weeks and then we can get our final air pressure test. Certification, undertaken by the AECB, team should hopefully follow quickly after that.

Our recent training event and site visit was well attended and we were pleased to meet so many with interesting Passivhaus projects in the pipeline. We had such positive feedback and interest that we've decided to repeat it in March, so please get in touch with me if you'd like to come along.

Bill Butcher is director of the Green Building Store.