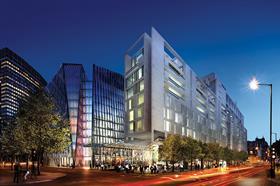 PC Harrington Contractors has filed a notice of intention to appoint administrators.

The news comes one month after the firm reported a £4.1m pre-tax loss in accounts covering the 12 months to the end of May 2014. Building has no information to suggest that any other of the group’s companies also intend to appoint administrators.

The firm has worked on a number of the UK’s most prominent projects over the last decade including the Gherkin, the Walkie Talkie and Wembley Stadium.

Recent projects that PC Harrington Contractors were working on include two major west London residential jobs - the £600m De Vere Gardens scheme and the £200m Fitzroy Place job - and phase one of Land Securities’ £350m Nova Project (pictured) in Victoria, according to contracts database Barbour ABI. It has also been working on the £150m scheme to provide a new home for the Design Museum at the former Commonwealth Institute, the opening of which has been pushed back by over a year, with the Design Museum blaming the “complexity of the renovation” of the building.

In its last set of accounts filed at Companies House, PC Harrington Contractors posted a £4.1m pre-tax loss in the year to 31 May 2014.

The firm’s board of directors described the loss as “extremely disappointing and well below the expectations of the directors.”

The loss was ascribed to two factors, the directors said. The accounts said: “Firstly, with regards to two large contracts which were taken on as the economy was coming out of the recession and which were subject to severe delays resulting in cost overruns that could not be fully recovered.

“Secondly the company was unable to sufficiently recover increases in labour and fuel costs that arose after the tender was agreed.

“The directors anticipate the effects of these two factors will continue to be felt into 2014/15.”

Credit rating agency Top Service Credit told Building it had received reports of payment problems related to PC Harrington Contractors from 61 firms - mainly materials suppliers and plant hire firms - and in total its customers were owed £800,000 by the firm.

Last week it was rumoured the firm is looking to sell its tower crane subsidiary - HTC - to German firm Wolff.

A person answering the phone at PC Harrington’s head office declined to comment on the news, and said the firm only responded to press enquiries made by post.