Leader of the House of Commons Andrea Leadsom has said that “political interference” is the most significant threat to the £4bn restoration of the Palace of Westminster.

Fronting the joint committee on the Draft Parliamentary Buildings (Restoration and Renewal) Bill yesterday (Wednesday), Leadsom said interference from Whitehall was the greatest threat to the “timely and efficient completion of [restoration and renewal]”. 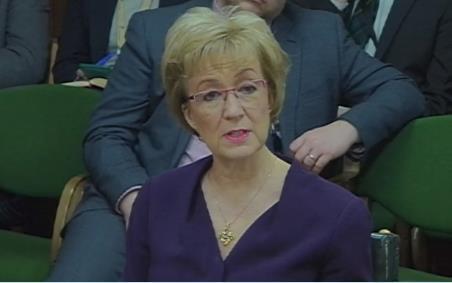 Andrea Leadsom facing questions at the inquiry on 13 February.

She added: “I think it’s quite interesting that the work to restore the palace has arguably been needed since the Second World War and I think it’s a great tragedy that we are here today as successive governments have failed to tackle this problem and of course the problem is that no one wants to take responsibility for it.

“I have to say I was really delighted that the houses … came together and said, ‘We have to leave it fit for the 21st century’.”

Leadsom said given the longevity and complexity of the project it was imperative that it was protected from changing political sentiment.

She said: “By the time this finished, we could be in the 2030s and therefore it is vital that any opportunity to remove the possible political interference that could stall it, that could add huge expense or have it going off at a tangent, be minimised.”

She said that by ensuring any issues or major changes be referred to parliament rather than the government would help to protect the project if a new government deemed it to be a low priority.

Leadsom said given the building was a UNESCO World Heritage Site it was the parliament’s responsibility to guarantee its long-term future, saying: “I think we just need to get on with this urgently.”

The renewal and restoration programme is being led by BDP, while CH2M is carrying out programme, project and cost management services on the refurbishment.

Plans are underway to relocate peers to the nearby QEII centre while MPs will move into Richmond House, which is part of the Parliament-owned Northern Estates.

Lendlease has been appointed to carry out work on the former Department of Health headquarters to turn it into a debating chamber and associated offices.

And Wates will carry out the £650m contract to upgrade a number of buildings set to contain MPs’ offices in Westminster known as the Northern Estate Programme.