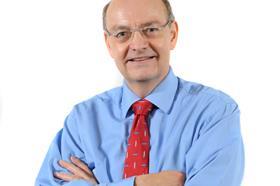 Hansford, who will step down from his role as executive director at management consultant Nichols Group upon taking up the post in December, was awarded the job this week. A total of 17 people applied for the industry’s most senior policy role.

Construction minister Mark Prisk said that Hansford, who sat on the panel overseeing Infrastructure UK’s review of civil engineering costs, had been chosen because of his “wealth of experience” in the private sector and “very good reputation in the industry”.

He said: “We had a strong list that was whittled down and there was a fair bit of deliberation, but Peter has the right balance for the job.”

Chartered engineer Hansford was ICE president from 2010 to 2011, and will take over from former quantity surveyor Paul Morrell in advising the government on construction policy and overseeing the implementation of the 2011 Construction Strategy, which was designed to cut build costs on public projects by 15-20%.

Prisk said Hansford would not undertake a “radical overhaul” of the Construction Strategy.

Peter has the right balance for the job

“We’re looking for someone who can make sure we maintain momentum, help remove waste from the government’s operations as a construction client and deliver on the green construction agenda.”

As chief construction adviser, Hansford will not only chair the Government Construction Board, but will also sit on the Green Construction Board. Hansford, whose appointment has been widely welcomed, has worked extensively with the public sector in the past, carrying out strategic reviews into the Scottish Parliament Building, the Nuclear Decommissioning Authority’s capital projects portfolio, Network Rail’s enhancements programme, and a number of other rail and energy projects.

Morrell said: “The major task is implementation [of the Construction Strategy]. [Hansford] has a deep understanding of what we are trying to do, combined with the organisational skills to lead implementation and the experience of the industry to know if tuning is required.”

Industry figures describe passionate rugby fan Peter Hansford as a “cerebral” and “approachable” character, but also someone who is not afraid to roll up his sleeves and delve into the detail of issues in a tenacious drive to get things done.

Those who know him say he tends to seek consensus on issues, but is not afraid to speak his mind in those discussions. They describe him as “passionate” and “driven”.

Notorious for his “very very tidy” desk, he is known for high levels of organisation and an ability to step back and take a strategic view.

Hansford was the driving force behind more rigorous professional development arrangements at the ICE because he is keen to ensure the industry develops its young workers.