Dutch parent of Bam Construct and Bam Nuttall posts heavy losses in construction and civil engineering businesses, including a £3m loss in the UK 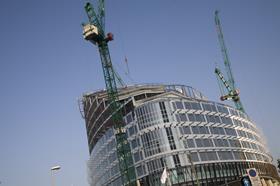 Royal Bam, the Dutch parent of Bam Construct and Bam Nuttall, has posted heavy losses in its construction and civil engineering businesses, including a £3m loss in the UK.

But it reported a 0% margin across the group and a pre-tax loss, after impairments and pensions costs, of €6.6m (£5.3m).

The group’s performance was dragged down by heavy losses in its construction and civil engineering arms.

The firm said the loss in its civil engineering business was due to a combined loss of €68m (£54m) on two problem projects in Germany and the UK, which it warned the market about in July.

Bam said it had “taken effective actions to ensure these projects are stable and will be delivered on schedule”.

Royal Bam said the €100m (£80m) cost cutting drive it announced in July was underway and would be completed by “early October”.

Royal Bam said the loss in the UK related mainly to its problem civil engineering job, which it bid in 2012.

The losses in the firm’s civil engineering and construction businesses were offset by profits from the group’s property and PPP investment arms.

Over the full-year, Royal Bam said it expected a profit before tax, impairments and restructuring costs of €20m (£15.9m).

The firm warned “there will be restructuring charges in the second half of 2014 and in 2015”.

Royal Bam Group chairman Nico de Vries said: “The results for the first half of 2014 show a mixed performance. In our two operational sectors, we continue to work through orders booked under very difficult market conditions - especially in the Netherlands.

“The two civil engineering projects with major losses which we announced on 7 July are stable; other projects delivered strong results, supporting the overall sector result for the first half.”