After another profit warning, Balfour Beatty tightens its bidding criteria and withdraws from the market in London 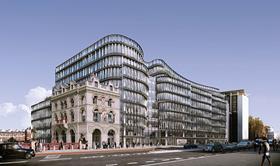 Balfour Beatty is expecting to reduce its £260m-turnover M&E business by around a quarter as it withdraws from the market in London and tightens its bidding criteria, after the construction giant was forced into issuing another profit warning last week, writes Allister Hayman.

Balfour Beatty said the £35m profit warning, issued last Thursday (3 July), was entirely focused on Balfour Beatty Engineering Services (BBES), the firm’s M&E business, and was due in the main to continued and deepening difficulties on a clutch of problem contracts.

The profit warning was the fourth since November 2012 for Balfour Beatty, with the most recent only in May, when the firm highlighted a £30m profit shortfall, of which around £20m was due to problems in the M&E business.

That profit warning prompted the departure of Andrew McNaughton, Balfour Beatty Group chief executive, after a year in the job, as well as the exit of Phil McGuire, BBES managing director, with the firm also announcing its intention to put consultant arm Parsons Brinckerhoff up for sale to refocus on the US and UK construction business.

Last week the firm said it would make up the latest shortfall in profit with additional disposals of PPP assets, meaning it expected overall profits for the year to hit expectations.

Balfour Beatty said it was on a 12-18 month programme to restore its UK construction business, and that outside the M&E business the regional and major projects divisions were performing in line with expectations.

Balfour Beatty’s M&E division makes up around 10% of the turnover of its UK construction services business.

Speaking to Building following last week’s fresh profit warning, Nick Pollard (pictured), Balfour Beatty’s UK construction chief executive, who has taken charge of the M&E business while the firm seeks a replacement for McGuire, said BBES was now stepping back from the wider M&E market in London and would now only work with other Balfour Beatty Group businesses in the capital.

“I prefer a smaller business that is more profitable. Size doesn’t matter to me - profitability does,” Pollard said.

Pollard said the rescaling of the business could lead to some job losses at BBES, though he did not expect there to be “major upheaval”. He said around £20m of the latest expected profit shortfall was focused on the same handful of problem jobs that the firm said was to blame for the profit warning in May. He said that in the eight weeks since the previous profit warning, the problems on those jobs had “deepened”. He said: “The contracts where we know we had difficulties - we’ve run those forward and some of the difficulties have got deeper.

“The jobs have gone backwards in their end date, so we’re going to be on site longer, with higher costs, and of course there is the possibility of penalties.”

He said a further £10m of the expected profit shortfall was due to problems on jobs that were not identified as part of a “deep review” of the business that the firm undertook prior to the May profit warning, as the problems had only emerged in recent weeks.

Pollard said a further £5m of the expected profit shortfall was the result of the firm putting in place more rigorous bidding criteria and therefore winning less work.

Asked if Balfour Beatty had now identified all the problems in the M&E business and if the latest profit warning was the last the market should expect, Pollard said: “What we know about, we’ve been honest about, and we’ve put measures in place to deal with it very swiftly.

“But we don’t know what we don’t know. Or what will happen tomorrow. Will a customer decide to do something different or decide not to pay us? We’re not in control of that environment.”

“What I do know is we stopped sometime ago bidding in the manner that led us to these problems.

“We got some bids wrong and we bid for some jobs that were the wrong kind of jobs for us and on some of those we’ve been treated wrongly.”