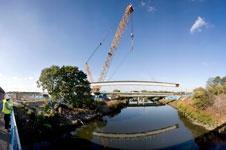 Government body says only £197m of contingency fund is unreserved, of which £160m could be swallowed up securing and maintaining park in lead up to Games

A Commons committee has warned that the budget for the Olympic park is “worryingly tight”.

The public accounts committee said that the schedule was on track, but the contingency fund was under pressure. The Olympic Delivery Authority had a contingency fund of £2.75bn, but only £1.27bn is left, much of which has already been set aside.

The committee estimates that the ODA now only has £194m unreserved, and it is possible for £160m of that to be swallowed up securing and maintaining the park in the run up to the Games.

Edward Leigh, the committee chair, said: “What's worrying is that the financial position is tight. Of the sum left within the Olympic budget for contingencies most is currently earmarked for known risks. But unforeseen problems continue to emerge to place fresh demands on the contingency.”

The ODA responded that the construction programme is still forecast to be delivered within budget, but added that this will be the toughest year for unforeseen problems, as the workforce peaks and work accelerates.