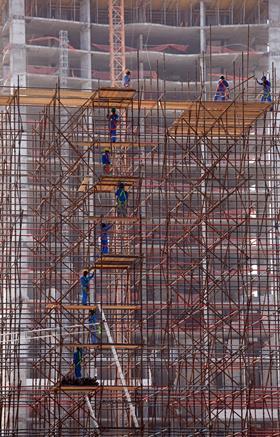 Qatar’s new set of welfare standards for workers on the World Cup construction project are “totally inadequate” and will fail to protect workers from conditions that have led to hundreds of deaths, unions have said.

Organisers of the Qatar 2022 World Cup yesterday published details of a new charter aimed at protecting the rights of workers building stadiums for the event, but not the wider infrastructure.

The move came after international controversy following the deaths of almost 200 Nepalese men on construction projects in Qatar last year, with the International Trade Union Confederation saying up to 4,000 could die by 2022 if conditions for migrant labour are not improved.

The workers’ charter, which builds on commitments made by the World Cup organisers last year, was outlined in a 50-page document that set out detailed standards on the payment of wages, accommodation, and welfare as well as promising a new inspection regime by the authorities to ensure contractors are adhering to the new standards.

Qatar’s World Cup Supreme Committee said the charter set out clear guidelines that would protect the rights of workers throughout the entire supply and had now been incorporated in all of its contracts.

The Supreme Committee said its main focus was on working with contractors to improve standards, but it would penalise contractors who are non-compliant with the charter,or “in extreme cases”, terminate contracts.

However, the International Trade Union Confederation (ITUV), which represents unions from around the globe, described the charter as a “sham”, saying it would not deliver “fundamental rights for workers” and merely reinforced the existing kafala system, whereby migrant workers are subjected to strict controls by their employer, or ‘sponsor’.

She said: “No migrant worker can be protected by any safety standard unless they have the right to collectively speak out about wages and conditions at work.

“No workplace voice or representative is allowed for migrant workers in Qatar. A worker welfare officer appointed by the employer is no substitute for a duly nominated worker representative.

“The promise to provide freedom of movement for workers is a sham, as Qatar enforces segregation of workers on a racial basis.

“With no legal compliance mechanism such as a tribunal, there is no possibility of enforcing even these provisions.”

“If FIFA are serious about Qatar continuing to host the World Cup in 2022, they will demand freedom of association such that workers can be represented by those they choose.

“This charter is a sham for workers. It promises health and safety but provides no credible enforcement.

“It promises employment standards but gives migrant workers no rights to collectively bargain or join a trade union. It promises equality but does not provide a guarantee of a minimum wage.”

“MOLSA will continue to support in enforcing these standards, and Qatar’s existing labour laws, and to work with other government bodies in Qatar in holding accountable employers who fail to uphold these laws.”

Meanwhile, this week Tim Corrigan, managing director of Kier Construction’s Middle East division told Building Kier had actively considered working in Qatar but was currently unwilling to work there due to the “competitive nature” of its construction market and its lack of rules to protect workers.

Corrigan recently met with Bert Schouwenburg, international officer for the GMB union, after the trade union wrote to 13 major contractors in November highlighting concerns about workers’ rights in the country.

Corrigan said Kier was in “full sympathy” with the efforts of the GMB and others to improve working and living standards for workers.

He said:  “We’ve steered away from Qatar. We won’t lower our standards for the people who work with us but we’re competing with firms that accept different standards.

“We are looking to the Qatari authorities to put in place something which levels the playing field and helps the workers.

“Most of our work in the Middle East is in the UAE, which does have standards for the treatment of workers.

“I’ve talked to various people in Qatar over the past few months and there is now a feeling that the government is waking up to international sentiment and will be taking steps to ensure that standards are on the way up.

“One would have to spend more on [building] better camps for the workforce for example.”

Corrigan added of Qatar: “Not getting paid on time is also a big issue for contractors – that is common over there. Clients also invite 20 or 30 companies to tender so why would we tender for something where the chances of winning are so slim?”