The Tory conference is going to be subjected to minute scrutiny in the hope that ministers will fill in some of the many blanks in policy. Sarah Richardson and Roxane McMeeken list the most important

The party conferences are going to be a bit unusual this year. For one thing, none of the venues comes equipped with a pier. For another, it really matters what the Lib Dems are saying, and their conference is attracting an unprecedented degree of interest from the media and trade bodies (even though any motions passed will not be changing government policy). Labour’s gathering is also interesting, largely because it will be where the identity of the next leader of the opposition is revealed.

For the construction industry, and pretty much everyone else, however, the Conservatives are the party that matters. But of course their conference is being held in the shadow of the Comprehensive Spending Review (CSR) in October. The coalition agreement signed in May, and the emergency Budget in June, set out the framework for cuts (which are to reach £31.9bn a year by 2014/15), but the CSR will spell out the grisly details.

There will have to be a strategic policy framework in place by the time the government gets around to spending the money it does have, and that means that construction needs to establish its own preferences, and lobby for them. Michael Ankers, chief executive of the Construction Products Association, says: “We now have a clear coalition agenda but on issues that are critical to the industry, across areas like housing, education and planning, the detail is being worked on. During the party conference season it will be important to see how some of that detail is beginning to emerge.”

So much of what David Cameron and his Cabinet members say in Birmingham next weekend will be pored over by interested parties searching for secret messages and hidden codes. The principal questions to be answered are:

How will the government simplify the procurement process for schools?
The Department of Education’s review into this, led by Whitehall mandarin Sebastian James, is looking at how to reduce the time needed to tackle a bidding process that can take up to a year. Although a full report is not due out until the end of the year, it is understood that the review panel will have drawn up a series of initial recommendations within weeks.

Some of its early considerations - cutting down on the length of the pre-tender questionnaire and early stakeholder engagement - have already emerged through a trial project launched this month. More measures are likely to emerge before the CSR.

What will happen to the PFI?
The Conservatives attacked Labour’s reliance on the PFI (which they invented) when they were in opposition, which leaves them with a headache when it comes to replacing Building Schools for the Future, which was part-funded with PFI credits. The government is understood to be leaning towards sticking with the PFI in some form; ideas mooted previously have included combining the PFI with a framework scheme for schools investors.

Will there be a delivery agency?
With frameworks looking the favoured procurement route for schools, the government will need to decide whether they will be managed by an external agency - such as Partnerships for Schools (PfS) - or whether those in charge of the programme will sit within the government. There has been a steady flow of quango-burning headlines since the government took office, but the position of PfS is still under review.

How can free schools and academies be signed off more quickly?
Sixteen free schools and 32 new academies have been approved since Michael Gove became education secretary, but there are severe doubts over how quickly the free schools, in particular, can be established. The government will look to head off jibes that the programme is floundering by announcing more projects, if it can - but it is under pressure from several schools groups to delay doing so until concerns can be addressed that the programmes will create a two-tier education system. And the Lib Dem’s grassroots revolt against the policy during the conference - the leadership’s first defeat - puts it under further pressure.

What will happen to the mechanisms that encourage housebuilding?
The future of the Homes and Communities Agency is unclear, as are grant levels for housing associations. Despite the news earlier this month that 44 out of 74 Kickstart schemes are to go ahead, amounting to 5,400 homes, the industry still feels it doesn’t have enough detail.

What is zero carbon?
Housebuilders need a conclusive definition of zero carbon - which is the status the government wants all homes to reach by 2016. The Zero Carbon Hub, a public-private partnership set up under Labour in 2008, which supports the delivery of zero-carbon homes is a start, but many housebuilders feel they need more clarity, especially if it increases their build costs at a time when house prices are heading south.

How will the new planning system work?
It is unclear what will replace the scrapped regional spatial strategies that set targets for housebuilding for councils, or how the gap
between the old and new systems will be bridged. Roger Humber, strategic policy adviser for the House Builders Association, says: “We need to know what the new planning system is going to look like and where housing fits into it.” Another hazy area is the government’s plan to incentivise local authorities to build housing. Humber said he hopes to at least see a consultation on this launched at the Conservative conference.

How will builders be regulated?
The government’s Green Deal, under which householders will have £6,500 of their home improvements paid for through their future energy bills, is heading for legislation. But there is still no mechanism in place to ensure that installers are reputable. Either an accreditation body needs to be set up, or the approval of installers will be incorporated into an existing scheme. If there are not enough installers, consumers won’t be able to take advantage of the scheme - and there will also be concerns over inflated prices.

Which products will be covered by the Green Deal?
Industry experts believe that there may need to be an independent organisation charged with reviewing the claims made about products to ensure that assertions made about their benefits are legitimate. It is also understood that officials are considering widening the scheme to include products other than just insulation. It is also unclear how changes in energy prices and the cost of solutions will be factored into the scheme.

How will the deal be linked to other home improvements?
It would be sensible to have a mechanism to encourage householders to take up the deal if they are having refurbishment or extension work done for other reasons; nothing has been done about this so far. 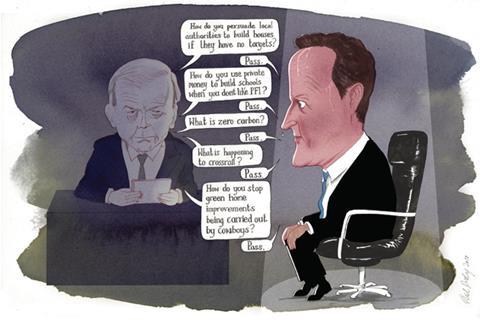 What will happen to Crossrail?
We still need to know whether this project will survive and if it does, whether it will be scaled back or have its timetable extended. One option understood to be on the table is to lop off about one third of the scheme’s £15.9bn budget.

What is the plan for high-speed rail?
The national high-speed rail link is another grey area. The good news is that the coalition has backed the principle and has even indicated an interest in expanding Labour’s proposed first phase beyond Birmingham. However, there are a plethora of plans for the scheme, each with different timetables, and with costs that range from £6bn to £50bn. The funding method is also uncertain. Even if the coalition preserves the PFI in some form, it is thought to be inappropriate for high-speed rail because revenues are unlikely to be much higher than running costs; so will the government stump up the money?

What’s being built in place of Heathrow’s scrapped third runway?
We know Heathrow’s third runway has been dropped along with the possibility of additional runways at Stansted and Gatwick, but we need to know more, such as whether other airports in the South-east will be bulked up and whether the first phase of the high-speed rail link will include a connection to Heathrow.

What’s the future for Network Rail?
Experts are not predicting a full-scale overhaul of Network Rail, but the train operators are pushing for greater involvement in infrastructure projects, including the delivery of schemes themselves. How open the government is to do this, and how it might work, are questions that still have no clear answers.

How will nuclear new build happen?
Although the Conservatives and the Lib Dems have given the green light in principle, nobody knows quite what is supposed to happen now. Paul Stapleton, head of energy at EC Harris, says: “There is a serious lack of clarity; we need the government to come out and say, we support nuclear and this is how it will be funded.”

Funding is a problem because although the government has said it will not provide any money itself, it has not explained why power companies should stump up £6bn
over the 10 years needed to build one station - with no guarantee of how much the energy will sell for when it is completed. The government has indicated that incentives should take the form of a carbon floor price (so if carbon is costly it makes it more profitable to produce low carbon nuclear energy) but it has not said how or when it would intervene in the carbon market.

The industry also needs to know what impact the overhaul of the planning system and the localism agenda will have on the build programme. In particular, the National Policy Statement, which suggests how to move forward with big infrastructure projects, has yet to be ratified. Similarly, a Major Infrastructure Unit has been set up to replace the Infrastructure Planning Commission, but the industry knows little about how it will work.

Another unknown is how firms will bid for nuclear work. Stephen Ratcliffe, director of the UK Contractors Group, says: “We need these questions answered now if UK firms are to gear up their capabilities and skills in time.”

What is the plan for renewable energy?
The government’s plans on wind power and other sources of renewable energy are also nebulous. There is certainly enthusiasm to increase supply, as stated in the Conservative and Lib Dem manifestoes, and the coalition has made clear it is committed to meeting the EU-wide target to cut carbon emissions by 30%, but we need to know the specifics, including how planning issues will be overcome and where the funding will come from.

Let’s play Conservative Conference Bingo!
Instructions: two to 10 players randomly divide the following 20 phrases equally between them and watch the TV like hawks. When a speaker (but not the commentator) uses one of their phrases, the player crosses it off their card. The first player to cross off all of their phrases shouts “Bingo!” and becomes undersecretary of state in the Department for Culture, Media and Sport.