Redrow has warned of a slowing housing market and called for permanent changes to stamp duty even as it posted a 124% increase in pre-tax profit.

The housebuilding giant, in its results for the year to 27 June published today, reported pre-tax profit of £314m, a substantial increase on the £140m posted last year amid the covid-19 lockdown. But the figure is still 23% lower than the £406m it posted in 2018/19 before the pandemic. 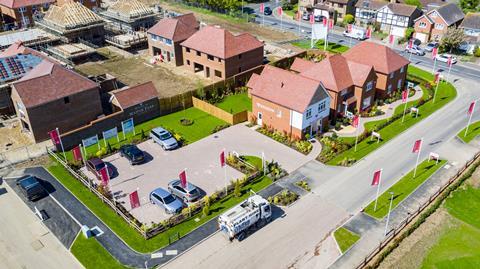 Its profit margin at 16.6% was higher than the 15.5% forecast earlier in the year, while its order book now stands at £1.43bn, which the firm said was a record.

John Tutte, chair of Redrow, said the housing market has been “buoyant” in recent months but “we anticipate sales rates will return to historically average rates over the course of the current financial year”.

He added that the government’s decision to extend the stamp duty holiday to the end of September, with phased cuts to relief, had prevented a hiatus in the market.

He said: “Given the unquestionable success of the temporary reductions in stamp duty to stimulate the housing market and its obvious knock-on benefits to the wider economy, we repeat our previous requests for government to consider a permanent reform of this tax, which is a constraint on the market.”

The housebuilder boosted its legal completions by 39% to 5,620. This helped reverse its net debt position from £126m to £160m in cash.

The group said it had made “significant progress” in the year in the land market following a pause due to the pandemic. It added 8,300 plots to its land holdings with a gross development value of more than £3bn. It increased its owned and contracted land holdings with planning approval from 27,000 to 29,460 year-on-year.

The group last year announced a decision to largely pull out of the London housing market and focus on other areas, notably its Heritage Collection of homes with designs influenced by the arts and crafts movement.

It said demand for the Heritage Collection helped mitigate the impact of Help to Buy changes, with Help to Buy accounting for 13% of its private reservations, compared to 50% last year.

He said: “While we support the broad intentions of the new code and framework; we believe that opportunities have been missed. The report’s recommendations have failed to take into account underlying lifestyle changes, which have been accelerated as a result of the pandemic.

“In a survey we commissioned of c.2,000 consumers, an overwhelming majority (77%) said they aspired to live in a two-storey detached home. Only 3% and 4% of respondents stated they would choose to live in a terraced home or townhouse respectively. This is contrary to the central ethos of the National Model Design Code.”