Redrow is set to start construction work next month on around 500 homes next to East Croydon railway station in south London, as the second phase of a key regeneration scheme in the area gets underway.

The housebuilder is working on the £200m Morello 2 scheme, designed by Make Architects, with privately-owned regeneration specialist Menta.

The homes will be housed in two 25-storey towers (pictured below, centre) and a separate building ranging between five and nine storeys.

Originally planned as a 56 storey, 171m tower, the scheme was rejigged to the current pair of towers and a series of lower rise blocks.

The first phase of the Morello development, on the site of a former Bank of America office block also next to East Croydon railway station, has already delivered around 300 homes. The latest element of the scheme was approved by Croydon council nearly two years ago.

The scheme will be a near-neighbour of the 136m-tall, 546-apartment 101 George Street tower, built by Tide Construction and Greystar, which is set to be the world’s tallest modular residential building. 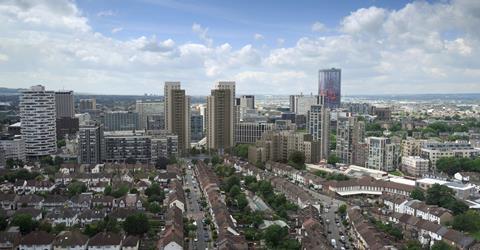