A new trans-Pennine high-speed rail link connecting Leeds and Bradford with Manchester would be worth £8bn more than previously estimated to the northern economy over the next four decades, according to research by Mott MacDonald.

The firm’s just-published reappraisal of the proposed Northern Powerhouse Rail upgrades show that the Leeds-Manchester element of the plans – originally known as HS3 – could deliver a £22bn boost to the regional economy by 2060 without factoring in other parts of the proposals. 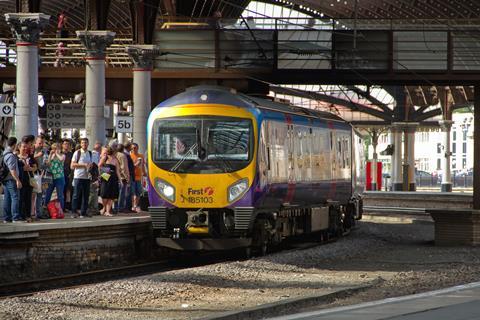 Passengers wait for a train at York station. Mott MacDonald said a new line between Manchester and nearby Leeds would add billions to the northern economy

Mott MacDonald said traditional cost-benefit analysis had failed to recognise the true economic potential of the link, first set out by then-chancellor George Osborne in 2014 as part of a wider package of measures dubbed the ‘Northern Powerhouse’.

His speech contained just one reference to the project – a commitment that the government “will do Northern Powerhouse Rail”. But it was lacking in further detail or timescales.

He said it would be impossible for the government to deliver on its pledges to level up left-behind parts of the country without delivering Northern Powerhouse Rail and completing the eastern leg of HS2 – linking the West Midlands with Leeds – which currently has a huge question mark hanging over it.

“Uncertainty over rail investment, in particular the eastern leg of HS2, is doing huge damage to our economy. We need to start building from the North down from Leeds to reach Sheffield to unlock connectivity benefits sooner,” he said.

“This is vital to releasing much-needed capacity on the rail line, improving local connections and allowing more goods to be transported by freight instead of heavily-polluting HGV lorries.”

The Integrated Rail Plan is expected to be published in the run-up to chancellor Rishi Sunak’s Spending Review and Autumn Budget on 27 October.

It was originally supposed to be published in March.