Residents of Accordia in Cambridge say they are facing financial ruin after their block was declared unsafe because it incorporates timber.

One resident said rules introduced after the Grenfell fire in an attempt to protect residents of dangerous blocks of flats had “spiralled into ludicrosity”. 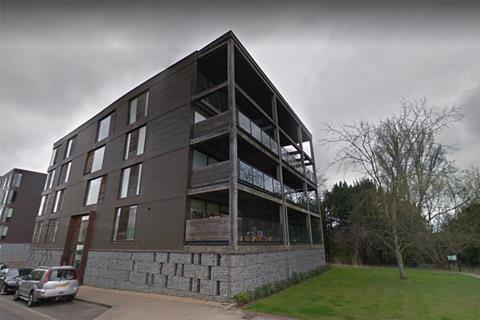 The Glass Building is part of the Stirling Prize-winning Accordia development in Cambridge which was designed by Feilden Clegg Bradley Studios, with other buildings by Maccreanor Lavington and Alison Brooks Architects

The Glass Building, part of the Stirling Prize-winning development designed by Feilden Clegg Bradley Studios, is said to have failed a facade safety survey because its timber balconies are supported by a framework of oak beams.

The firm that carried out what is understood to be an EWS1 survey reportedly says these will need to be replaced because of new rules which state that external walls should not be capable of spreading fire.

Architects have previously criticised the government for extending the ban to the use of structural engineered timber.

Reconstruction work would leave the owners of the nine flats facing huge bills, according to a report in the Sunday Times.

One owner, Julia Kenyon, told the paper she was facing bankruptcy despite the fire risk being “minuscule” because of the building’s small size and wide staircase.

The Glass Building is 15m tall, making it ineligible for a grant from the government’s £4.5bn Building Safety Fund which is only for blocks over 18m. Residents in lower buildings are expected to take out a loan, secured against the property, with repayments capped at £50 a month.

“I am frankly shocked by the government’s continued underestimation of the scale of our building safety crisis,” she said at the time.

According to the Sunday Times, about 700,000 people are trapped in dangerous flats and three million are in homes they cannot sell unless they pay for “defects” to be made safe.

Questions are now being asked about what should be classed as a defect and whether homeowners are being ripped off by private firms.

Labour will raise the matter in Parliament on Tuesday and call for a government agency to be set up to tackle the issue. Shadow housing secretary Lucy Powell said: “Because there is no real risk measure in the system, the amount of remediation works that people are being told need to be done to get a mortgage or insurance are just ever growing.”

Andrew Mellor, a partner at PRP, which advises MHCLG on building remediation and who has examined numerous at-risk buildings, told Building’s sister title Building Design: “We are seeing that EWS1 forms are driving some unnecessary remediation as a result of a lack of understanding of risk from surveyors, commercial risk mitigation by the surveying companies and instructions from PI insurers.

“It is hoped that the emerging BS9980 will help to align external wall surveying processes and outcomes, and reduce the amount of remediation required.”

He stressed he did not know the details of this case but said the oak frame was likely to char not burn in the event of a fire, although the balconies themselves might perform differently.

He added: “It looks as though the balcony oak structure is external to the building so it would seem the balconies could be remediated without much effect on the building. Of course, the architectural impact is great as it likely means a new steel structure and metal decking. This will change the appearance of the building and the original design intent.”

Architects have long been critical of the scope of government support for affected homeowners. They have also attacked ministers for including the structural engineered timber such as CLT in its ban on the use of combustible materials in external walls.

Alex de Rijke of Stirling Prize-winners dRMM, which designed the UK’s first CLT public building in 2004 – Kingsdale School in south-east London – accused them of an uninformed and counter-productive knee-jerk reaction.

And the Architects’ Climate Action Network (ACAN) predicted during a consultation last year that the decision would “greatly increase the perceived risk of building with timber structures despite a significant amount of research around the safety of engineered timber systems such as glue-laminated timber and cross-laminated timber”.

Accordia won the Stirling Prize in 2008. FCBS declined to comment.