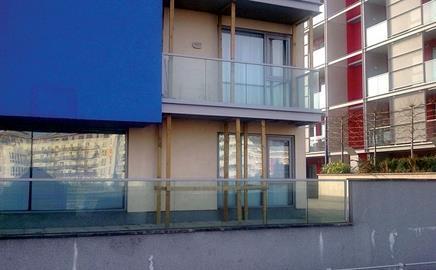 A £1.5m dispute over an award-winning luxury apartment scheme designed by last year’s Stirling prize-winner is set to reach the courts next month.

The Point on Bristol’s waterfront was completed by Skanska for developer Crosby Homes at the end of 2001.

Drawn up by Feilden Clegg Bradley (FCB), designer of the Stirling prize-winning Accordia scheme in Cambridge, the 115-apartment scheme picked up a host of prizes in 2002, including Building for Life awards from Cabe and a RIBA award.

However, all 113 residents have now launched legal action against Crosby after balcony ceilings began caving in. A hearing has now been set for next month at the Technology and Construction Court.

The company charged with looking after their homes, The Point (Bristol) Management Company, was forced to put up a series of wooden props on the apartments’ balconies following collapses last year and in 2007.

The first soffit fell in two years ago, which led the management company to fork out £90,000 on repairs to 50 apartments.

A second soffit gave way last summer leading to dozens of props being put up. But a spokesperson for the management company said it could not afford to repair the ceilings and had begun legal action against Crosby.

The company is claiming £1.5m on behalf of the residents and the spokesperson said any remaining repairs would not be completed until after the legal action.

Crosby declined to comment. Skanska and FCB, which are not involved in the dispute, also made no comment.

The apartments ranged from around £290,000 for a two-bed flat through to £600,000 for a series of townhouses also built at the site. in the shadow of the historic SS Great Britain – designed by Brunel and the largest ship of its time when launched more than 150 years ago.