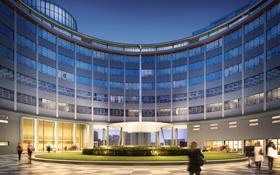 Revised plans by AHMM for the £1 billion redevelopment of BBC Television Centre at White City have been approved by Hammersmith and Fulham council.

The revisions agreed include demolishing existing buildings at the site – known as stage 4 and 5 – and replacing them with a 10-storey office building.

Under the original plans, the stage 4 and 5 buildings were due to be refurbished to provide speculative office space for new media companies.

The revised plans – which include a new Soho House private members’ club, 950 homes, office accommodation, hotel and retail – were submitted in May.

A change in use from residential to commercial has also been approved for a new nine-storey office building fronting Hammersmith Park on the site of the old BBC restaurant block, pushing the increase in office accommodation across the site from 32,500sq m to 48,000sq m.

Other practices working on the west London scheme include dRMM, Duggan Morris, Maccreannor Lavington and HOK.

The scheme is being developed by Stanhope and Japanese firm Mitsui Fudosan.

Construction work is due to start next April with the BBC’s commercial subsidiary BBC Studios and Post Production – which helps build TV studios for shows such as Deal or No Deal – due to operate three studios at the site from 2017.

Its main commercial arm, BBC Worldwide, will move into a new home at the site early next year.