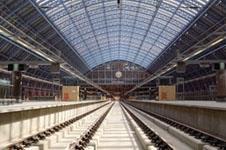 The full list of RIBA Regional Awards has been announced.

Allford Hall Monaghan Morris will be among those celebrating, with four wins in the London region alone. It scooped the capital’s Building of the Year award for its Westminster Academy, and picked up gongs for the Johnson Building and Sweeps Apartments, Adelaide Wharf, and Sunshine House.

All of the regional award-winning buildings will be put forward for the national awards in June, whose winners are then considered for the Stirling Prize, awarded in October.