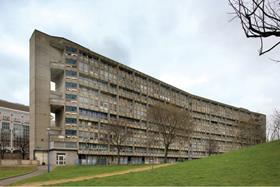 Architect Richard Rogers is urging the entire profession to rally round Robin Hood Gardens by deluging the heritage minister with emails calling for the seminal housing project to be listed.

Rogers has teamed up with his colleague Simon Smithson, son of the scheme’s architects, Alison and Peter Smithson, in a last-ditch attempt to save it.

They have written an impassioned open letter on email to architects and the wider construction industry, which they hope will go viral.

Titled “Three days to save Robin Hood Gardens from demolition!” the email describes the buildings in Poplar, east London, as “one of Britain’s most important post-war housing projects”.

It says they believe the heritage minister, Tracey Crouch, will make a decision tomorrow on a new bid by the Twentieth Century Society to have it listed.

The society submitted fresh arguments for the protection of the buildings earlier this year, as the planned demolition to make way for an Aedas-designed masterplan moves closer.

A previous attempt in 2009, as part of a high-profile campaign led by the society and Building Design, ultimately failed. The society is arguing that Historic England made mistakes when it advised the government not to list the 1972 estate.

“Can we ask you to support the efforts of the 20th Century Society by writing right now to the minister to support listing and saying why you believe Robin Hood Gardens should be saved?”

They give Tracey Crouch’s email address and a hashtag and urge people to spread the word. (See below)

Margaret Hodge, the former architecture minister who turned down the last listing bid, told BD in March: “Anyone who wants to list that place should try living there. It is simply not fit for purpose and I cannot believe that anyone is trying to list it. They should try living in it or raising a family there.”

I am writing to ask you to support listing Robin Hood Gardens as a building of special architectural interest, in order to protect one of Britain’s most important post-war housing projects, designed by Alison and Peter Smithson, from demolition.

Previous efforts in 2009 to have the building listed failed, but the case has now been re-opened and we understand that the new Minister for Sport, Tourism and Heritage will be reviewing the arguments at the end of this week.  The buildings, which offer generously-sized flats that could be refurbished, are of outstanding architectural quality and significant historic interest, and public appreciation and understanding of the value of modernist architecture has grown over the past five years, making the case for listing stronger than ever.

The UK’s 20th Century Society has submitted a paper setting out why they believe Robin Hood Gardens should be listed (ie added it to the statutory list of buildings of special architectural and historical interest).

Two further assessments are set out below:

Alison and Peter Smithson were the inventors of the New Brutalism in the 1950s and as such they were the ‘bellwethers of the young’ as Reyner Banham called them. In many ways [Robin Hood Gardens] epitomizes the Smithsons’ ideas of housing and city building. Two sculptural slabs of affordable housing create the calm and stress free place amidst the ongoing modernization of the London cityscape. The façades of precast concrete elements act as screens that negotiate between the private sphere of the individual flats and the collective space of the inner garden and beyond. The rhythmic composition of vertical fins and horizontal ’streets-in-the-air’ articulates the Smithsons’ unique proposition of an architectural language that combines social values with modern technology and material expression. Despite the current state of neglect and abuse Robin Hood Gardens comprises a rare, majestic gesture, both radical and generous in its aspiration for an architecture of human association. As such it still sets an example for architects around the world.”

“The Smithsons were clearly great architects: the Economist Building, completed in 1964 and Grade I-listed in 1988, is without a doubt the best modern building in the historic centre of London. Robin Hood Gardens, which pioneered ‘streets in the air’ to preserve the public life of the East End terraces that it replaced, was the next large-scale job that the Smithsons embarked upon. It was architecturally and intellectually innovative.  In my opinion, it is the most important social housing development from the post-war era in Britain.”

Can we ask you to support the efforts of the 20th Century Society by writing right now to the Minster to support listing and saying why you believe Robin Hood Gardens should be saved?

Click here to open an e-mail to the relevant Minister at the Department for Culture Media and Sport, Tracey Crouch MP: Minister-sportsandtourism@culture.gov.uk.

For more information on the building click here, https://en.wikipedia.org/wiki/Robin_Hood_Gardens, and for details of the 20th Century Society case, please click here, http://www.c20society.org.uk/casework/robin-hood-gardens/

Also, can we ask you to forward this e-mail to anyone else you know who might be willing to help save these important buildings?