The government’s drive to ensure smaller housing blocks are no longer subject to EWS1 form requirements has hit a setback with the Royal Institution of Chartered Surveyors (RICS) refusing to change its current guidance on their use.

This flies in the face of the recent insistence by ministers that housing blocks below 18m in height should no longer require fire safety checks. 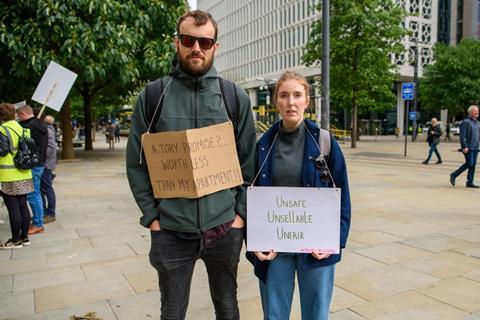 But, following a five-month consultation, RICS has decided to retain its current advice, which recommends valuers use the controversial fire safety information forms on blocks of under four metres in some circumstances (see box below). RICS said the move will “protect both the public and the stability of the property market”.

Ministers in the summer said EWS1 forms, which have been blamed for widespread difficulties in getting homes valued and mortgaged, should no longer be required on buildings under 18m in height.

But in a statement today, Dame Janet Paraskeva, chair of RICS’ independent standards and regulation board, said the guidance should stay in place to “safeguard the public interest”.

She added: “This is so that purchasers do not risk finding themselves trapped in flats of any height because potentially crippling costs are ignored and passed unwittingly on to them, which so many current owners have discovered too late.

“In taking this position the board has heard the views of the lenders, valuers and conveyancers and is clear that RICS must not let this critical issue be swept under the carpet because the correct inspections have not taken place.”

In August, several key lenders including HSBC and Lloyds told Building’s sister title Housing Today of the need to work with RICS to update its guidance.

UK Finance, a trade association for lenders, said at the time that once all documents, including the RICS guidance, are updated “borrowers and lenders should be in a clearer position” about what they should do regarding smaller blocks.

The government has been approached for comment on the RICS decision.

According to analysis last year by the new Build Database and the Daily Telegraph, 3.7 million properties in blocks between 11m and 18m are affected by the EWS1 form rules.

For buildings over six storeys an EWS1 form should be required where:

For buildings of five or six storeys an EWS1 form should be required where:

For buildings of four storeys or fewer an EWS1 form should be required where: