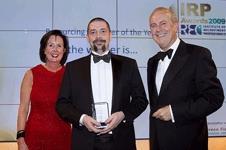 These are the only awards to be given by the recruitment industry’s trade body.

Reilly was shortlisted with three others in the non-agency recruiter category, beating strong competition which included a nominee from Amec.

This award recognises a recruiter who operates outside the agency office environment such as in the public sector, online recruiter or in-house recruiter.

The judges were looking for an in-depth knowledge of the roles they recruit for, their understanding of how to attract quality candidates and to demonstrate the ability to select the right candidate from a short list.

In addition, the individual must show credibility within their own organisation who consistently demonstrates high staff retention, innovative approaches to advertising for roles and is respected and recognised for their professionalism and commitment to ethical recruitment practices.

Reilly’s application centred on his role as regional director for the IRP, his qualifications in HR, recruitment and psychometric assessment, with particular emphasis placed on innovative talent attraction through the 'protégé' scheme.

This year’s awards saw a 100% increase in nominations with a total of 15 awards presented at the ceremony.

Reilly was supporting the moustache growing charity event Movember held during November each year to raise funds and awareness for men's health.

For the latest careers in construction visit Building's job site.