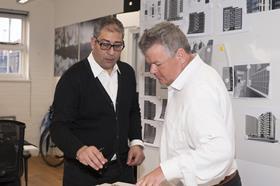 Costa will take a senior position in Ryder’s operation in the capital and moves after 25 years with Jestico & Whiles.

A Ryder spokesman said the appointment reflected the company’s view of opportunities in the capital and the south of England, and would draw on Costa’s skills in residential, commercial and transportation work.

Ryder was founded in Newcastle in 1953 and also has offices in Liverpool and Glasgow.

“The idea is to build on work we’ve done in the residential market in London and the south including a new approach we have for buildings for those aged 55 and over or those with dementia,” the spokesman said.

“There may be opportunities to increase staffing London but it already has 15 staff so it’s not small.”

Costa’s work has included high-end residential schemes Wilton Plaza, Victoria, and 99 Baker Street, Westminster, the Adria Hotel in south Kensington and commercial developments such as Equitable House in the City of London.

His work in transportation includes Transport for London’s Camden Town and Marble Arch stations and the Sydney Light Transit system.

Costa said: “I’m very excited to build on Ryder’s growing influence in the capital and contribute to what is a vast heritage of creative architectural excellence.”