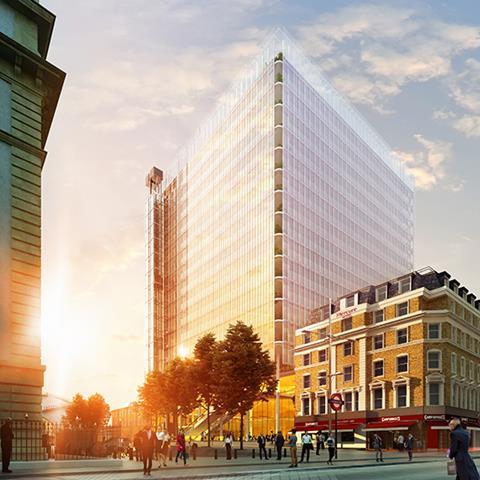 The £775m mixed-use scheme, designed for developer Sellar Group, won planning permission from Westminster council last year after being radically redesigned from original plans for a 72-storey tower to a squat 19-storey block.

Campaign group Save Britain’s Heritage last month secured a first-stage judicial review hearing into the legal soundness of communities secretary Sajid Javid’s decision not to call in the scheme for a planning inquiry, based on its size and the impact on nearby heritage assets, such as the grade I-listed Paddington station.

Imperial’s challenge centres around safe access for ambulances to St Mary’s when the Paddington Cube is developed, on the site of an Edwardian sorting office between the hospital and the train station.

According to the court documents, the trust was unaware of the developer’s proposals for ambulance access at the time of the planning committee meeting that approved the scheme, and that those proposals had subsequently proved “undeliverable” because they “assumed the relocation of facilities that could not be relocated”.

A trust spokeswoman said: “We have been continuing to engage with the council to seek amendments to the section 106 agreement to address our safety concerns.

“But, as the deadline for applying to make a formal legal challenge was Monday September 25, we felt there was no alternative but to make an application in order to keep all options open.

“We are still hopeful that we can achieve amendments that address our safety concerns without further legal action.”

Westminster City Council cabinet member for planning and public realm Cllr Daniel Astaire said: “Safety is of paramount importance in all of the council’s planning decisions.

“The City Council, Transport for London, the Mayor for London and the Department for Communities and Local Government have considered all the issues raised but having undertaken transport surveys and assessments do not agree with the hospital’s stance on this matter. We await the outcome of the court proceedings.”

A spokesperson for Sellar said: “The access road which will be built to adoptable standards that forms part of the consented plans by the developer has been recognised by all public transport authorities as safe.

“The current access route is a disaster and those ambulances travelling virtually the full length of an extremely congested Praed Street down from Edgware Road already struggle to reach the hospital in good time.

“Our route avoids this dangerous Praed Street, London Street junction. “We believe along with a number of independent experts that this new access road will be a safer and more efficient road.”

A date has yet to be set for Imperial’s challenge to the Cube. In August, Save Britian’s Heritage said it expected its challenge to be heard before the end of the year.

Its review revolves around transparency and Javid’s failure to give a reason not to call in the scheme for an inquiry when the decision was announced in March.

Last month, Save director Henrietta Billings said the scale of the Cube – designed for Shard developer Sellar Property Group – was entirely alien to its immediate neighbouring buildings in a conservation area, and sent out a message that Westminster was abandoning its once-exemplary conservation and design policies.

“This challenge has potentially wide-reaching implications - it goes to the heart of transparent and accountable government decision,” she said.

“Ministerial decisions must stand up to robust scrutiny – the duty of government to give reasons for decisions is relevant to anyone involved with the planning system. We are pleased that this challenge will now proceed.”