Severfield-Rowen has announced a £20.1m hit to its profit, including a £10m overrun on the Cheesegrater job 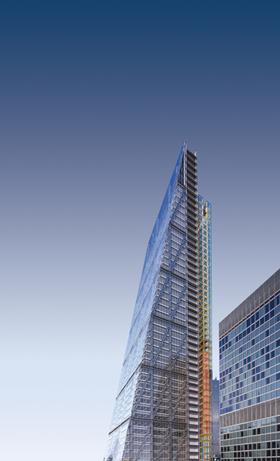 Severfield-Rowen has announced a £20.1m hit to its profit and loss account as cost overruns on contracts, including a £10m overrun on Cheesegrater job, drove down its performance.

In an update to the City this morning, the firm said a review of 70 of its contracts had identified nine problem contracts, including the 122 Leadenhall Street job - the City tower known as the Cheesegrater. The firm said an expected profit on the overall life of the Cheesegrater contract had now been changed to a loss, with the firm taking a £9.9m hit in the 12 month period ended 31 December 2012.

The firm said the “technical challenges of the site works” on the job were “significantly greater than originally estimated and will require longer timescales and greater resources to complete”.

The firm said actual and potential cost overruns were identified on three other contracts, totalling £2.9m with the cost overruns charged to the profit and loss account in the year-ending 31 December 2012.

The firm said it also reduced the expected value of five other contracts - three of which remain ongoing - by £7.3m. It said the contracts “have all been subject to significant variations from the terms agreed at the commencement of the contract”.

The firm said its remaining 61 contracts were performing in line with expectations.

As a result of the contract review, Severfield-Rowen said it would take a £20.1m hit to its profit and loss account in the year-ending 31 December 2012.

The announcement comes after the firm’s chief executive Tom Haughey has stood down last month after cost overruns on the Cheesegrater tower.

The firm said it had now taken steps to improve its “contracting estimating procedures” and had identified “a requirement for stronger contracting processes and discipline notably in execution and risk assessment, particularly in relation to its more complex contracts”.

“The implementation of these improvements will be undertaken as expeditiously as possible,” the firm said.

The firm said was continuing its discussions with its banks, as outlined last month, regarding compliance with its covenants. It added that its shareholders had indicated support for a potential equity fundraising of £50m.

The firm said it would announce its results for the year-ending 31 December 2012 together with terms of the equity fundraising and the group’s amended banking facilities by 28 February.

John Dodds, Severfield-Rowen executive chairman, said: “Despite the disappointment of the financial impact on the group from the findings of this review, I am encouraged by many of the conclusions drawn from it and by the actions we will be taking to improve our business.

“This is a good business which remains well supported by its customers. It is important to note that, following our rigorous review process the vast majority of the Group’s contracts are progressing satisfactorily.

“I am also greatly encouraged by the strong and visible support we have received from our leading shareholders and the constructive discussions we continue to have with our lenders around the longer term financing of the Group.

“We believe that the Group can return operating margins to between 5% and 6% over time and I am confident that the longer term fundamentals of the Group remain strong.”