Exclusive: Willmott Dixon and Bam among the contractors competing to build new Warner stand at the famous cricket ground 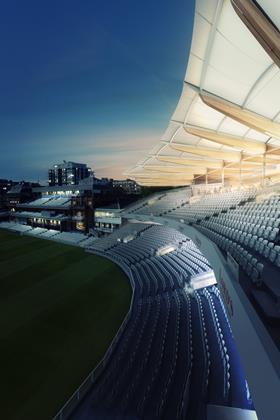 View of the Upper Tier and Pavilion

Willmott Dixon, ISG, Galliford Try, Bam, Barr and Buckingham Group are on the shortlist for the £13m contract to redevelop the ground’s Warner Stand, a job which involves the demolition of the existing 1950s stand and its replacement with a new one designed by architect Populous.

Some of the contractors were interviewed this week at the ground in St John’s Wood, Building understands.

The project, which is in for planning at Westminster council and is worth £21m in total, proposes 2,900 seats - 90 more than at present - and also involves a restaurant, three bars, and facilities for match officials plus green features such as ground source heat pumps and photovoltaic panels.

However, a proposal to reduce the amount of leg room in the new stand has run up against opposition from members of the Marylebone Cricket Club (MCC), which owns and operates Lord’s.

At the club’s forthcoming annual meeting in May, a motion has been tabled to allow members to complain that the 850mm of legroom per seat is inadequate.

However, the scheme’s proponents point out that adding to the legroom would cut the number of seats and affect the gradient of the stand and thus the quality of spectator views.

An MCC spokesperson said: “We believe [850mm] makes sense in terms of increasing the capacity of the stand and also improving views from it.”

Overall, the Populous masterplan will increase Lord’s capacity to 32,500.

It replaced a previous £400m masterplan by developer Almacantar and Swiss architect Herzog & de Meuron which was controversially scrapped in 2011.