Exclusive: Swedish contractor absorbs Homes by Skanska into wider UK company, with some roles ‘under review’ 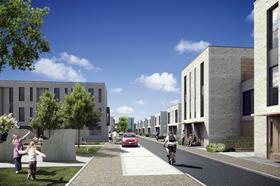 Skanska has culled its standalone UK housing firm, bringing the two-and-a-half-year-old business in-house, with the contractor also admitting it will no longer hit its 2015 target to become one of the UK’s top 20 housebuilders.

Magnus Andersson, president of Homes by Skanska, told Building the housebuilder’s previous aim of building around 800 homes a year in the UK by 2015 - a number that would have made it one of the country’s top 20 housebuilders - would no longer be achieved, due to difficult market conditions. However, he denied the tough market had prompted the restructuring.

“The restructuring going on […] in the UK is also being done in the Nordic countries,” Andersson said. “That is how we want to organise the residential units within Skanska. It’s a way of streamlining the business.

“We have a long-term commitment to this market and the support for this business is very strong both from Sweden and the board here in the UK.”

He added that a consultation with Homes by Skanska staff was taking place and was likely to be concluded in mid-May. The firm said “less than a dozen” roles were under review.

He said the firm was looking at the possibility of retaining those individuals in other roles within the UK construction business.

Last month Skanska was one of a number of major contractors to lose their places on the Homes and Communities Agency’s £4bn housing framework in favour of a raft of major housebuilders.

Building Value analyst Tony Williams said the restructure suggested Skanska Residential had not been successful as a standalone entity. He said: “With a few notable exceptions, it’s best to keep housebuilding and contracting businesses separate as they have different philosophies and capital requirements.”

Skanska launched its UK residential business and a residential operation in Poland in December 2010 as part of a global strategy to target growth in international residential markets. Homes by Skanska’s aim was to deliver high-quality homes and the firm said it wanted to be “recognised as a design-focused developer”.

The firm signed up six architects to a design framework in 2011.

Homes by Skanska is developing a 45-home scheme in Bath and larger schemes in Bristol, Cambridge and Cheltenham. The first phase of its first development - the 128-home scheme at Seven Acres in Cambridge (pictured) – is complete.