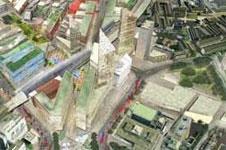 Southwark council has denied seeking a new developer for its troubled Elephant and Castle scheme even though an exclusivity deal with incumbent, Lend Lease Europe, lapsed on 1 July.

The council is set to meet with Lend Lease on 21 July to discuss options.

A spokesperson said the idea that the site might be divided up into smaller plots was “speculation.”

She added: “We are still talking to Lend Lease and hoping to reach an agreement by the 21st. There is an executive meeting with the council on that date and a final decision will be made as to how we take this forward.

“During this time, we are not talking to anyone else. As far as we are concerned, the regeneration programme and continues. Options have not been considered by the council beyond its relationship with Lend Lease.”

The five-year-old project, on 23 hectares of land, is set to provide more than 3,500 new homes, 46,500sqm of shops and restaurants, leisure facilities, 32,500m² of offices, public transport infrastructure and other public facilities including a new library, town square and parklands but has stalled in recent months.

Ongoing discussions with Transport for London resulted in the provision of a new £1.8m roundabout in March, but around £238m more is needed to increase capacity for the Northern Line and improve passenger access to the underground and rail stations.

A joint transport study with TfL is due out this summer.