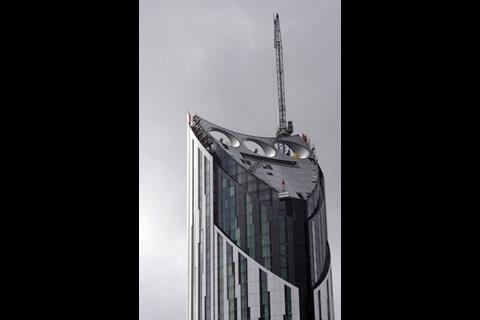 Three 9m-diameter turbines are due to be installed on Strata’s roof, making it the world’s first building with turbines fully integrated into the building’s fabric 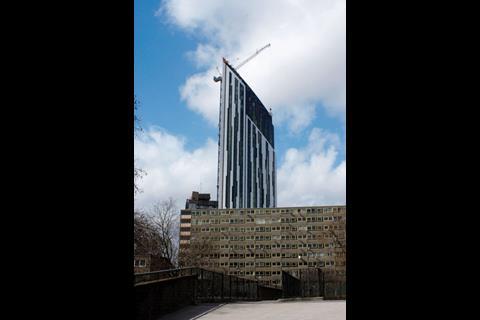 The Strata tower is perched on the edge of the notorious Heygate estate, a vast seventies housing development that epitomises the area’s urban deprivation 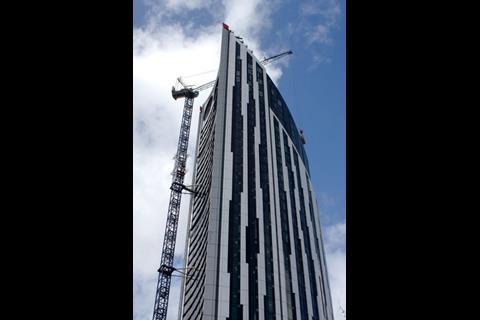 The Strata tower sticks out 150m above south London’s downtrodden Elephant and Castle. But, rather than being a symbol of aspiration, the building is turning away from the very area it’s meant to be giving a lift

The Strata tower is perched on the edge of the notorious Heygate estate, a vast seventies housing development that epitomises the area’s urban deprivation

For the past two years, something strange has been growing in south London. Like the omnipresent Gherkin, it seems to be visible from everywhere, with sightings reported from as far afield as Clapham and Islington. In the bizarre recent tradition of selecting irreverent nicknames for the city’s skyscrapers, this one has already been christened the Razor. Now, as it nears completion, the three huge holes bored into its sloping peak have merely heightened the mystery.

The building in question is the 43-storey, 148m-high Strata tower in London’s Elephant and Castle. Designed by BFLS (formerly Hamiltons Architects) and built by developer Brookfield Europe, the £113m scheme will be the tallest residential tower in central London when it is completed in May. And it cuts a striking figure. Strata’s prow-like profile is formed by two symmetrical curved facades that are stripped back on their uppermost storeys to reveal a telescopically protruding, chamfered inner tower. The outer facades are clad in a white, metal fascia which contrasts sharply with the inner tower and the series of black, jagged, vertical window bays sliced into its surface. The structure will eventually be topped by three giant five-bladed wind turbines (hence the mystery holes). According to the developer, these will supply up to 8% of the building’s energy and are the world’s first fully integrated turbines. However, fears concerning the noise and vibration they will potentially generate have already led to possible plans to switch them off at night.

Visually, the tower’s overall effect is a hybrid of Blade Runner and a roll of lipstick. Despite the noble environmental intentions behind the turbine docks, they and the mechanical articulation of the profile and facade evoke a cartoonish theatricality that recalls the stylised imagery of sci fi and eighties post-modernism.

Such an indulgent visual palette may have proved more successful had it been realised with greater subtlety. But Strata’s massive scale, uncompromising form and wilfully discordant colour scheme were hardly designed for seamless integration into a local context or strategic views. London is dynamic enough to embrace contrast and spontaneity. But when visual gimickry imposes a 500ft barcode onto the cityscape, it is perhaps time for statement to be tempered by sensitivity.

Certainly, Strata has already provoked fiercely divided opinions, and it is not difficult to see why. It stands out not only because of its height, but also because, unlike in the City, it is the only tower in this part of London. True, it is only the first stage in Elephant and Castle’s £1.5bn regeneration plans, after which it will inevitably be joined by similarly sized contemporaries. But for now, both it and its surroundings appear to be casualties of London’s haphazard tall buildings non-policy.

In PR terms, Strata has been undeniably effective in raising the profile of the area. And not before time. Neglected by planners, battered by the Luftwaffe and derided as a symbol of post-war architectural failure, Elephant and Castle urgently needs talent, investment and marketing to transform it into a successful model of urban living. The role Strata can play in this is welcome.

As is its use of an architectural typology relatively rare to central London: the residential as opposed to commercial high-rise. And unlike the nearby Doon Street tower proposal, (which has restricted all its 329 flats for private sale while cynically appeasing the 17,000 people on Lambeth’s housing waiting list with a swimming pool and leisure facility), Strata will dedicate 25% of its 399 flats to affordable accommodation. This is a clear and commendable sign of its commitment to the social as well as urban regeneration of the area.

But should regeneration come at any cost? Is an inharmonious colour scheme and unnerving similarity to personal grooming accessories less important than the billions of pounds poised to rejuvenate one of London’s poorest districts? Essentially, is “regeneration ransom” ever a price worth paying? The neutering of Land Securities’ dystopian Victoria Transport Interchange proposals last year sets a precedent that suggests not. Of course, regeneration at Elephant and Castle or any other deprived inner-city location is essential. But never at the expense of urban character and context.

Ironically, it is the issue of regeneration that perhaps exposes Strata’s most disappointing feature. To put it bluntly, tall buildings should not have a back. Sides are fine, but when the scale of a building makes such an extensive impact, no orientation should be articulated as secondary to another. Skidmore, Owings and Merrill’s Broadgate Tower, which reserves its sleekest Manhattan-inspired facade for the City while thrusting an ungainly patchwork of plant and service shafts over north London, is a prime example.

Sadly, Strata is another. The footprint and shape of the building has been partly informed by the desire to create new public space at ground level and mitigate the effects of wind. However, behind its flashy twin curved profiles lurks a sheer concave wall that extends the full height of the tower and stares out blankly over south London. The impression is that the tower looks towards the north while turning its back on the very part of London whose regeneration Strata is meant to herald. This emphasis perpetuates exactly the kind of civic bias that many blame for disenfranchising parts of south London in the first place. One hopes that the remainder of Elephant and Castle’s massive regeneration will be composed along more sensitive and equitable lines.