Transport for London (TfL) has begun feasibility work on a proposed extension of the Docklands Light Railway (DLR) across the river Thames to link up with thousands of planned homes at Thamesmead in Greenwich.

A £1m deal to fund the work has been inked between the boroughs of Greenwich and Newham and Thamesmead Waterfront, the JV between Peabody and Lendlease which is developing the huge £8bn scheme to build at least 11,500 homes on a 250-acre riverside site in south east London. 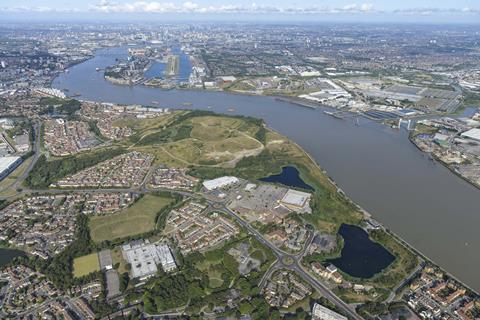 Asset manager Aberdeen Standard Investments and St William, a JV between Berkeley and the National Grid, have also signed the funding agreement.

It comes following London mayor Sadiq Khan’s formal signing of the Thamesmead and Abbey Wood Opportunity Area Planning Framework at the beginning of the month, supporting the proposed DLR extension.

The funding deal will allow TfL and its partners to further develop the new route, which will link the existing Gallions Reach station near London City airport with Thamesmead via Beckton Riverside in the borough of Newham.

TfL said the extension, which was included in its submission to the government’s Comprehensive Spending Review in November, could support the delivery of up to 25,000 new homes along the route.

The work will look for potential sites for stations and consider the potential for new bus, walking and cycling links.

A joint commission between Arup and Atkins for design, engineering and environmental assessment will carry out the work, with Aecom providing socio-economic support.

Last month, a competition was launched to find masterplanners for the Thamesmead development, which will be the largest project in Peabody’s 158-year history.