The answer to recession is to get Britain building 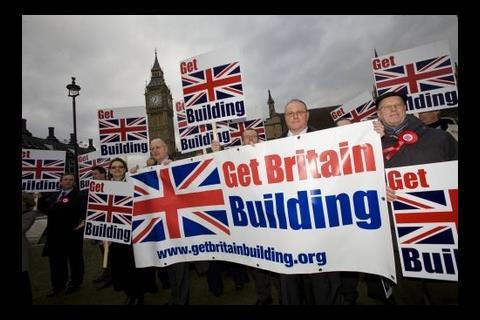 Some 300,000 people set to lose their jobs, hundreds of factories closing, a 92% rise in repossessions, 4 million people on housing waiting lists and an 11-year wait for a council house in Castle Vale, Birmingham. What will it take for our government to wake up and smell the coffee? The recovery we all crave will be born out of building a better Britain and not encouraging spending on foreign imports in the high street.

This is the clear, urgent and determined message from the Get Britain Building Campaign – the biggest coalition of industry voices from the built environment, who launched their campaign at the House of Commons on Tuesday 10 February 2009.

The Get Britain Building Campaign is about outcomes, not rhetoric, and the time for government spin is over

MPs from the three main political parities came to support the campaign, which is chaired by Building editor Denise Chevin, and explained their parties' policies to address the major concerns of the industry.

A packed House of Commons heard representatives from across the industry spectrum express frustration at the lack of immediate action to get Britain building. This is now critical to halt a decline that is undermining our skill base - and will, if not checked, result in the loss of most of our manufacturing and distribution capacity, which is vital if we are to build the homes and public buildings this country needs from the future.

We need to unite and fight for our great industry. Action is needed now

The Get Britain Building Campaign is about outcomes, not rhetoric, and the time for government spin is over. We need to unite and fight for our great industry. We must all challenge our local MPs and actively campaign for banks to be told they have to engage in responsible lending; for more new social homes and public buildings to be built in 2009; and for VAT to be cut to 5% on home improvements in the spring 2009 Budget.

These measures are entirely in Gordon Brown's and Peter Mandelson's grasp. Action is needed now. The way out of recession is to Get Britain Building, by making the much-needed investments today for all our futures.

Mike Leonard is director of the Modern Masonry Alliance