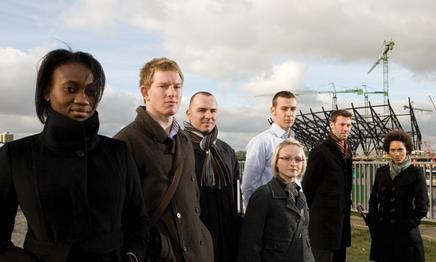 In the next four years there will be moments, both good and bad, that will stay with them for the rest of their lives and Building plans to follow them through all of it.

The only surveyor in the village

I was working for Carillion in the maintenance department back in Maesycwmmer, my small village in Wales. The biggest job I’d done was £2m so I asked my boss if I could try working on a slightly bigger project. I couldn’t believe it when he came back and said, “How about the Olympics?”

I started at Carillion in admin and had never even heard of a QS. Now I am training to be a qualified surveyor on the project that everybody wants to be involved with. I am in a fantastic position.

Biggest challenge
We are hoping to be on site next year and since I’ve never been on site before, I see this as my biggest challenge. It may sound silly but I am genuinely nervous about it.

The first off the blocks

I remember the moment I became determined to be part of the Olympics. It was the day after the bombs went off on 7/11 and I was sitting in the office with my boss, Ken Shuttleworth. I said to Ken it would be wonderful to be part of a spectacle like the Olympics and that it was an opportunity not to be missed. He said to me: “Go and win us a project then.” Our Olympic work has been my responsibility ever since.

I think our pitch to design the handball arena succeeded because we offered a project with high design quality and a raw practicality.

So now here I am leading the design consortium as project architect. This role means I am responsible for co-ordination and ensuring that we work together as a team. Working on the Olympics is something that I can look back on proudly for years to come.

Biggest challenge
This project has to come in on schedule, within budget and has to be perfect. It is a classic triangle of time, cost and quality. Unfortunately, those three criteria rarely go together. In any project, you normally excel in just two. So the biggest challenge is ensuring that we achieve all three.

I first went on site as a kid in Ghana with my dad, who was a civil engineer. He’s the reason I went into civil engineering. When I was younger, he used to work in the UK on and off and I first came over here aged 15 to go to boarding school. I could have gone back to Ghana to work with my dad but I decided to stay here to prove that I could develop a successful career on my own first. I didn’t want people to think that because civil engineering was the family business I had landed a job in the industry by default.

It is hard to describe the elation of working on the Olympics. I have wanted to work on the site for ages so I am ecstatic to be assigned this.

It is hard to describe the elation of working on the Olympics. I have wanted to work on this site for ages

My responsibility is for design co-ordination. In other words I am a link between Atkins and the client, CLM. It is basically a problem-solving role ensuring there are no clashes and everything runs smoothly for the 18 months we are on site.

Dad is a quiet man, but I know he is very proud and excited for me now I’m on the Olympics.

Biggest challenge
We have to do two things – design for the Games and then ensure those designs have a legacy. Trying to bring those two elements together doesn’t always work. Certainly, for the legacy aspect there is no group looking into it in detail so that makes it harder for us. It is really scary that everything has to be done by 2011 – it is a deadline that simply can’t be missed.

How did I get here? I was born in Botswana, although I was at boarding school in South Africa until the age of 16. I then insisted that I wanted to do my A levels in the UK and much to my surprise my parents let me go. So I moved over on my own, which was a bit of a culture shock.

My first degree was in performing arts but after a while I got sick of being poor. QSing is really my back-up career plan coming into action. I started paying for my MSc in surveying (for non-cognates) on my own before I started job hunting for QS jobs. I was then extremely fortunate to get a place on the Balfour Beatty graduate scheme this year and was even more fortunate to be posted to the aquatics centre project. Although performing arts and construction are obviously very different, I think my first degree taught me how to present myself confidently and it probably helped to convince the firm that I was ready for this role.

At first I was a bit daunted by the prospect of working on the Olympics, especially since this is my first job in the industry. But I have to say that I am working in a really supportive environment, where I can ask loads of questions without being made to feel stupid.

Biggest challenge
Juggling everything – I will be studying for a masters, doing my APC, plus working on this project.

The great thing about this job is that I’m learning about all types of construction, and all at a fast pace. I can see everything from the civils construction to the roof structure and the landscaping. This is the only project that would expose a young graduate to that range.

My current job involves making sure the utilities works are not getting in the way of other construction work, or vice versa. I also check that contractors are complying with the brief.

My first job on the site was as an assistant procurement manager on the infrastructure and enabling works. I then moved on to the archaeological investigation, and then to assistant project manager for the bulk earthworks.

Biggest challenge
Absorbing as much information as possible without letting it fly by. It gets to the point where things happen so fast that you think, I didn’t even see how that structure went up.

It’s little things that get me going, like seeing a crane going up – we all get our kicks in different ways …

I grew up in Montrose, which is a small town half an hour south of Aberdeen. It’s a beautiful place by the sea and the mountains are close by, so you can go always hill walking. But it feels quite isolated there. Also Aberdeen’s big thing is the oil industry and I wanted to work in an industry with a more everyday product.

So two-and-a-half years ago I came down south. I wanted to work on big exciting construction projects – that’s why I joined Arup. Now I’m on the Games I can’t believe my luck. I love telling people in the pub that I’m working on the Olympics.

But I get loads of stick from my mates from back home. They call me a southern softie and say my accent’s changed. I have to admit, today the temperature was 5ÞC and I was a little bit cold so maybe they have a point …

Still, I can’t see myself staying in the Smoke for too long. I expect in 10 or 15 years I’ll move out to a village and get back to normality.

Biggest challenge
I do think about how the public will react to our work. After all, their money is paying for it.

You could say I’m into my sport – I’m a member of Buro Happold’s sports team and I won gold and silver for Great Britain at the Junior World Rowing Championships in 1991. I got involved with sports projects even before I graduated – my first Olympic work experience I was as a student engineer on the Sydney Superdrome.

In August 2007 I moved down to London to work on the main stadium and have been involved since the design was at stage B, basically a blank piece of paper and a few ideas!

When the concrete plinth at the base of the stadium started coming up, that gave me a real buzz. But it’s also little things that get me going, like seeing a crane go up – it might sound sad to other people, but we all get our kicks in different ways…

My role is making sure we deliver what we said we would, and do it on time. I’m managing a team of six engineers and four technicians, plus I have my own packages to so there’s a design element to my job, too.

We’re being pushed to complete the work ahead of programme, so I’mconstantly pushing to deliver work early to the contractor, McAlpine.

I don’t row any more these days – I’m too busy with this job!

Biggest challenge
Lifting the stadium roof will be a crunch moment. It’s a complicated piece of erection and it has to go perfectly. It’s one of the last things that happens structurally and will mark the completion of the best part of our work, so it will be a milestone. I will definitely be having a few drinks that night!