Work is first part of redevelopment of Ludgate and Sampson Houses

Familiar rivals Mace and Multiplex have been joined by Balfour Beatty in chasing a towers scheme in London’s Blackfriars for developer Native Land.

The deal is for the first towers at the split site of the former Ludgate House and Sampson House office blocks on the southern side of Blackfriars Bridge.

Cementation Skanska is already carrying out piling works on the Ludgate House job ahead of three buildings going up on the site, which is the former home of the Daily Express and Building.

The tallest is set to be a 48-storey tower, known as LH2, which will have 240 homes with the other buildings, LH1 and LH3, a lower-rise residential building of 17 apartments and a 221,000sq ft office building.

One source said: “It’s high-profile so everyone will be going hard for it. I don’t know what the value will be but it’s got to be north of £200m.”

Ludgate House, which was opened by former prime minister Margaret Thatcher in 1989, is directly opposite Berkeley’s 50-storey One Blackfriars, built by Multiplex, and was torn down by McGee last year.

Balfour Beatty has been growing its business in London’s high-rise residential market and is on site with a 53-storey scheme called the Madison in South Quay while it recently beat Multiplex to the next phase of the Lewisham Gateway scheme.

The firm, which was also behind the scheme to extend the nearby Blackfriars station across the river, used to have offices in Ludgate House before moving out in 2016 ahead of the building’s demolition.

Ludgate House is part of a wider development Native Land is overseeing in the area with McGee now demolishing Sampson House after tenant IBM moved out last autumn.

This building was completed in the 1970s by Fitzroy Robinson and is situated on the eastern side of the railway line that cuts the site in half.

Sampson House will eventually have five buildings of mixed-use including just under 350 homes, as well as a hotel and office space.

The Blackfriars area is set to see a cluster of towers spring up in the coming years with a 52-storey tower by Wilkinson Eyre and a 33-storey building by Brisac Gonzales Architects planned at a plot to the south of One Blackfriars on Blackfriars Road. 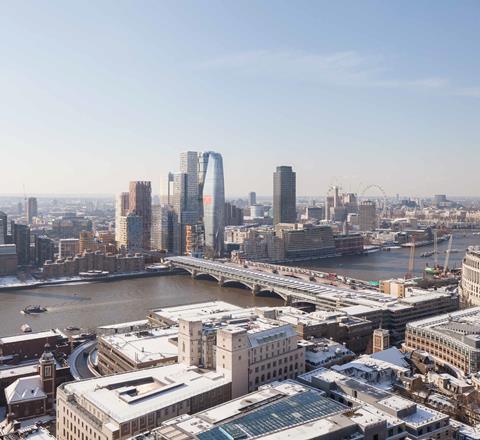